Clash of Clans isn’t the only popular game from the developers at Supercell getting updated, as today the company unleashed a huge winter update for Hay Day. The game is a popular free farming title available on iOS, Android, Facebook and more, and today’s update introduces the Champions league, new leaderboards and much more. Read on for everything Hay Day players need to know.

Back in September Hay Day received a large but optional update, with lots of new changes. And now today many of those are mandatory, as a huge update is rolling out this morning for all players, on all platforms, around the globe.

This morning the popular freemium farming game was offline, and many players confirmed multiple issues with misplaced animals, trophies showing up wrong, and other issues, but most of those have been resolved. The game is now back online ready for farmers to enjoy all the major changes that arrived just in time for the winter season. 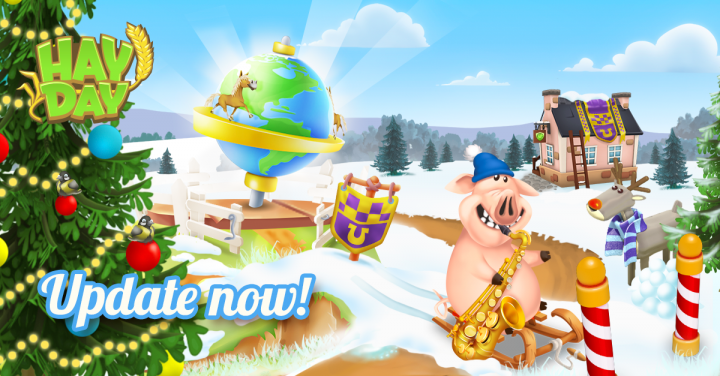 In September a fall theme arrived, new pets, Derby improvements and more, but that’s nothing compared to what was released this morning. This is officially the Hay Day 2015 Winter update, bringing snowfall and more to villages around the globe. That isn’t all either, with the update Supercell has added a slew of “community requested features” that will surely make many long-time players extremely happy.

Hay Day was once one of the most popular games around, and still in 2015 is inside the top 20 highest grossing games on iOS and Android, and with good reason. The developers constantly add more features, additional pets, new village options and more to keep players invested in farming.

Those who’ve abandoned the farm will be happy to know that now is a better time than ever to give Hay Day another try, or revive an old village. The update is available as we speak, and here’s everything that’s new. It’s a big one.

What’s New: Big Derby Additions and Improvements!
• Reach the highest league level, the Champions League, to compete with the best neighborhoods in the world for derby points within the new global leaderboard. Can your neighborhood be the number 1 in the world?
• Get more derby rewards than ever before with the Champions League!
• A new Neighborhood Trophy tab to help you keep track of your precious derby wins.
• A Spectator Mode for opted out players to see their neighborhood’s derby progress
• See everybody’s achieved points from the previous derby and final standings, during the derby pause.
• Derby league level is now visible on your neighborhood house for everyone to see!
• New Derby achievements available!

Some of the most dedicated and best neighborhoods in the world will now be within reach thanks to a new global leaderboard. More Derby points and improvements have been made, and the new Champions league will highlight the best of the best.

There is a new trophy tab for users to help keep track of wins, a spectator mode for those who opt out of derby’s and even new achievements.
Community requested Features:
• The Newspaper box now shows an animation when a new Newspaper is available.
• The Gift Catalogue and the Wheel of Fortune prizes now have brand new decorations.
• Newspaper Tool Offers have been improved.
• The holiday season has arrived to your farm. Make sure to stay tuned for our upcoming Holiday and New Year’s event with very special decoration prizes!

Additional:
• Traditional Chinese support added.
• General bug fixes and improvements
• Added more information on where to get the necessary building supplies for upgrades in the Barn / Silo UI.

As you can see above Supercell also added in some of the most popular or most manageable “community requested features”. Some of those including new decorations from the Wheel of Fortune prizes, sleek new animations when the newspaper arrives, and even newspaper tool offers have been improved. Head to the forums for more details on all the changes.

Last but not least Supercell confirmed some general bug fixes have been included, but they also recognized that after the update some users are experiencing problems with missing or misplaced pets, trophy counts being wrong and more, and they’re working hard to fix any problems that remain. Traditional Chinese support was added as well, not to mention more information on where to get building supplies for upgrades and such.

Overall this is a pretty big update for those who’ve been playing Hay Day for a long time. It’s rolling out on all platforms as we speak, so be patient, as it will be here soon enough if you’ve yet to receive the Hay Day Winter 2015 update.