HBO finally got around to updating its HBO Go for Android application with support for Android 4.1 Jelly Bean, Google’s latest and greatest mobile operating system. However, it doesn’t look like its compatible with at least one Jelly Bean device, the Nexus 7.

The changelog on the Google Play Store for the HBO Go application claims that the software is now compatible with Android 4.1 Jelly Bean. However, we have been unable to install it on any Jelly Bean devices.

Update: The app is now compatible with Jelly Bean, Nexus 7 and all.

The application states that it’s incompatible with the Nexus 7 and a Verizon Galaxy Nexus running Android 4.1 Jelly Bean is also unable to take advantage of the software. 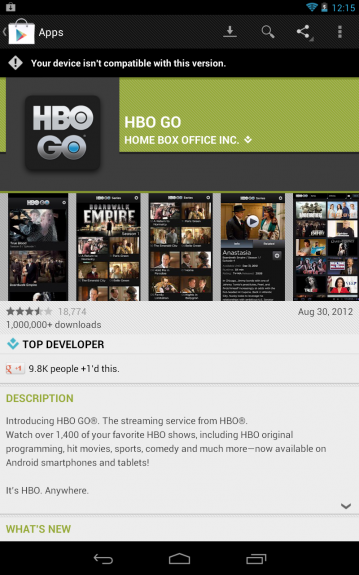 This has us and consumers alike scratching our heads and wondering what’s going on.

It’s possible that compatibility could come later on today but at this point, it doesn’t appear as though HBO Go for Android actually works on Android 4.1 Jelly Bean powered tablets and smartphones.

HBO Go is one of the applications that Jelly Bean device owners, and Nexus 7 owners specifically, have been dying to take advantage of since the software’s July launch.

In addition to “support” for Jelly Bean, the update for HBO Go brings a bunch of bug fixes for the software though HBO is mum on exactly what they are. We imagine that they will help shore up at least some of the issues that have plagued users of the app though.

So, at this point, the application remains unusable but we imagine someone might find a way to side load it or provide the .apk file for manual installation soon.

In the meantime, Nexus 7 and Jelly Bean device owners will have to use another app to watch non-HBO shows.