For RIM and many BlackBerry hopefuls, the Canadian smartphone-maker’s BlackBerry 10 operating system is intended as a the platform to help RIM compete more effectively against iOS and Android in an increasingly crowded and competitive smartphone space. Based on the same QNX OS that powers the company’s BlackBerry PlayBook tablet, the BlackBerry 10 OS is intended to give RIM a boost. So far, we are hearing little about the hardware that will run the new BlackBerry 10 OS and the company’s been relatively silent on the hardware requirements behind the OS ahead of its developer conference in Orlando this year where it will be giving developers early prototype hardware running BlackBerry 10. While the waiting may be gruesome for die-hard fans of BBM and the platform, one design house has remained productive while waiting and has created a BlackBerry Blade concept, a design that is dubbed an ‘iPhone-killer’ and attempts to take on Apple’ empire and renew a war that was initially waged by Palm with the Pre and webOS some years ago.

Like its Palm counterpart, this design calls for a vertical slider that has a portrait-oriented keyboard when the screen is slid upwards. There is also a capacious touchscreen on the front–something that RIM is not unfamiliar with considering the company’s Torch design. 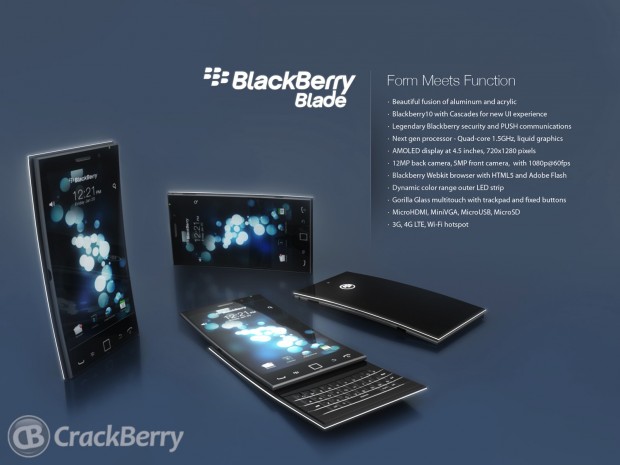 While the specs may seem ambitious as it calls for a quad-core 1.5 GHz processor, in reality, that could very well be a possibility. The PlayBook was among the first dual-core devices announced and that device has a dual-core 1.0 GHz CPU. Considering Android’s now headed towards quad-core with recent Tegra 3 introductions, RIM may try to usher in a quad-core device to remain competitive with specs on paper.

Like the Nexus S and the Galaxy Nexus, the device will utilize a curved display.

Could this device do for RIM what the Pre admirably attempted–but ultimately failed–to do for Palm? In the past, a device called the BlackBerry Milan was leaked. That phone utilizes a similar portrait-oriented slider form factor.