Every holiday family gathering presents an opportunity for me to gain a little anecdotal knowledge about how real folks are using mobile tech, what their preferences may be, and what their nagging questions are. This past Thanksgiving holiday was different only in the fact that I’m now living in Chicago and surrounded by my wife’s very large extended family. So there were more opportunities to observe and listen. 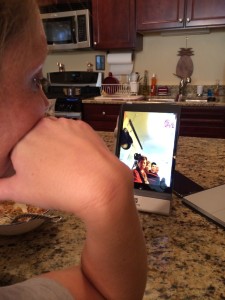 Again, all of this is anecdotal, and the observations are only from a small slice of the world. But I find them intriguing nonetheless. The first holiday family tech observation I made throughout several gatherings this past weekend is that smartphone platform preference seems to be split pretty evenly between iOS and Android. There wasn’t a Windows Phone in sight. There were still a few dumb pones around, although that percentage is dropping. When you see a gaggle of nieces and nephews hanging out together, you can also sense that there is a “follow the leader” mentality whereby one niece or nephew with an iPhone seems to have influenced the others and set a trend. (“I want what Natalie has.”)

Taking and sharing photos is as big or bigger than it ever has been at these sorts of events. We had a very large birthday celebration for a relative yesterday and whenever one person whipped out a smartphone to take a picture, it seemed like a small stampede would follow doing the same thing. FaceTime was a distant second to videos sent by text when it came to sending along birthday greetings from those who couldn’t be there. No one used Skype that I could see.

On Thanksgiving day my wife and I used FaceTime to touch base with my family members back in Virginia and that was a nice treat. Intriguingly my immediate family is all iPad with Tablets, but all Android with smartphones.

As to the Chicago clan that smartphone division seemed equally split as I mentioned before. The female side of the family seemed to prefer iPhones while the male side seemed to prefer Android phones. All of the iPhones were in some sort of case. Only about half of the Android phones were in a case of some sort. Galaxy S3 and Galaxy S4 phones were the predominant choice among Android users. Last year’s iPhone 5 and this year’s iPhone 5S were the predominant iPhones. There wasn’t an iPhone 5C in sight at any of the events. 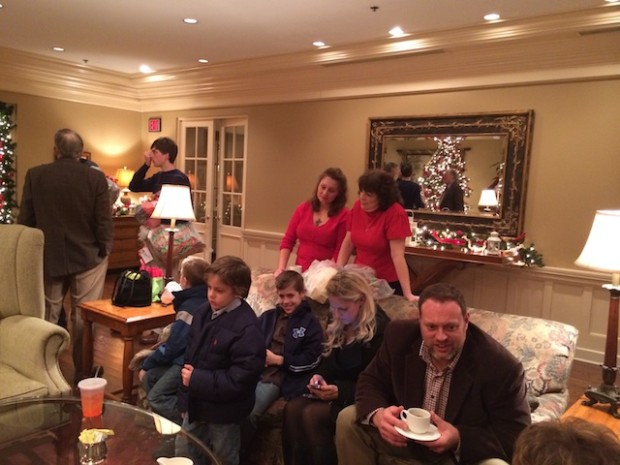 Each of the events took place on days where football was being played either on the pro or college level and it was fun to watch the guys almost in unison pull out their phones once a score notification came in. ESPN Apps have scored with this bunch.

Fortunately I received fewer tech support questions this year than I expected, but I received quite a few questions about what to purchase this holiday season. None of these folks were doing much Black Friday or Cyber Monday shopping, by the way.

The three most frequent questions along these lines were as follows:

These questions came from parents looking to make a holiday purchase for their kids. Regarding Tablets the majority were interested in the iPad mini as a purchase. When I asked why the iPad mini versus the iPad Air, the answers were uniformly about the smaller Tablet being a better fit for their child. Most seemed more interested in the lower priced first generation iPad mini than the newer model with the Retina display. Cost was a driving factor. Most were surprised and disappointed that they could only get the older version in a 16GB configuration. The reason? They knew their kids wanted to play games on the device, so there was some awareness of the size of Apps.

Other non-purchase related questions that popped up frequently:

When I asked some questions the answers were intriguing.

To those interested in a Tablet purchase I asked if they were considering a Microsoft Tablet. The answers ranged from “No, Microsoft sucks” to “I didn’t know Microsoft had Tablets.” Most folks I talked to use Windows at home and work, and all seemed really confused and some really turned off by Windows 8.1 and the new UI.

When asked what the primary use of a smartphone was the answers ranged from “keeping in touch with the kids and friends” to “playing games.” Most use them as messaging devices and not to make phone calls.

When asked if they used their phones for GPS navigation the answers were intriguingly split. Those with iPhones did via Bluetooth in their cars. Those with Android phones did not. Most using either phone did not use them for media playing while in their cars.

When asked why a Tablet was on their holiday gift list, the answers mostly revolved around peer pressure. “All my kids friends have them” was heard several times.

When I followed up on that question and asked more specifically about how they saw their kid using a Tablet the answers were quite telling. Some felt that Tablets were passing fads and the Tablets would end up not being used. Those that responded in that way were the ones most interested in the cheap Tablets. The folks who were interested in their kids using them for schoolwork were the ones very concerned about price points. They leaned towards iPads, and had very little knowledge of other Tablets on the market from other makers, although the newer Kindle Fire was attracting attention. Again, price point makes a difference in these circles.

When I brought up the subject of Chromebooks, I was met with blank stares of ignorance. In these limited circles Chromebooks had not penetrated on any level. When I explained what a Chromebook offered, no one seemed interested and a couple sited the lack of Microsoft Office as the reason.

And speaking of Chromebooks and Google, in these circles, Microsoft’s Scroogled campaign had made an impact. Some were quite convinced that Google was reading their data. One family had switched from Gmail to Yahoo mail because of this. Advertising during football games works. The Cloud (anybody’s Cloud) is generally distrusted in these circles.

Again, all of this is unscientific and extremely anecdotal, so take these observations in that context. I’m never surprised at how much or how little folks who don’t spend their lives paying attention to mobile tech are. Quite honestly, I think those who make and sell mobile tech hope and depend on the fact that their customers have just a little bit of knowledge. For most of the non-geek population these things are tools and playthings.

But the nicest observation is that with the exception of keeping up with football scores and gaggles of teenage girls constantly messaging their friends, the majority of those in these family circles seemed very content to turn off their mobile gadgets and just enjoy each others company. Unless there was a picture that needed taking.