Android or iPhone? The question seems so innocent. But asking it, or sharing your personal opinion on a smartphone brand is asking for a strong and opinionated response — even in response to a well-reasoned statement.

We see it here at GottaBeMobile, where the comments explode when we compare the iPhone 4S to the Galaxy Nexus or iOS to Android. Despite my love for both Android and iPhone, and a passion for innovation that comes from heated competition, I get called a fanboy at least once a day.

I will get called an iPhone fanboy, and two hours later an Android fanboy, but sadly never a smartphone fanboy. 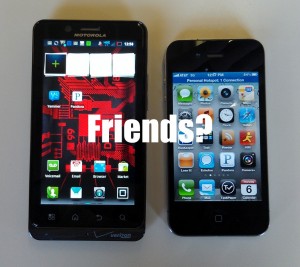 Mike Elgan of ComputerWorld noticed the same results of talking about the Android vs. iPhone, so he asked what Android owners think about iPhone owners. A good question since the Android user base is often much more opinionated, or at the least louder about their opinions.

In his post, What Android fans think of iPhone users, Elgan shares some of the most commonly held beliefs about iPhone owners, straight from the mouths of Android fans.

Here are a four of the highlights, you can find more on the ComputerWorld post. These are reasons I have heard frequently, and am probably guilty of thinking or saying during the early days of the iPhone vs. Android debate.

The iPhone is a status symbol. iPhone buyers are attracted to the Apple brand as a prestigious status symbol or fashion accessory, for the same reasons people like Rolex watches or Gucci bags.

iPhone users will buy anything Apple sells. In the minds of iPhone users, the “halo effect” of other Apple products, including the iPod, carries over to the iPhone.

iPhone users don’t like technology. While Android phones feel like “technology,” the iPhone feels like a consumer appliance. Some choose iPhones because they want to avoid technology.

After finally purchasing an iPhone, to use alongside and Android device, I can’t argue with the many areas that the iPhone beats Android, but there are just as many areas where Android phones win. You can learn more about each phone does better in, 14 Days With the iPhone 4S: An Android Switcher.

Ultimately, this is as personal a choice as Ford or Chevy, Budweiser or Coors, religion, politics and your perfect spouse. Without knowing what someone values and wants to do with their phone, it’s impossible to say whether they should go Android or iPhone. If someone claims to tell you otherwise, they are full of it.

So, what do you think of these stereotypes? I’m curious to know what iPhone fans think of Android users.