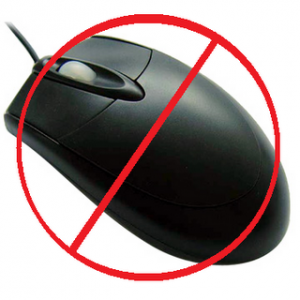 One of the best features of a tablet PC is that it does not require external input devices. On slate tablets in particular the lack of a keyboard and track pad, as well as the slim form factor makes them portable, easy to use and in many ways downright fun. Ultimately although the concept of “what is” a tablet is clear, the reality can be very different.

For many people the multi-touch approach only goes so far. Eventually, things like personalization or input speed have an impact. This is why standardization, other than the iPad, has yet to occur in the Tablet space. With an increase in devices available on the market manufacturers are still vying for that lucrative “second place” to the iPad. I still think that better input methods will lead to tablet glory, so in this post I thought I’d cover off some thoughts on each.

Windows tablets were always built around handwriting recognition and the Tablet Input Panel (TIP). The technology has advanced rapidly since the Windows XP days and today’s Windows 7 tablets are quite efficient at picking up your handwriting quirks in many languages (as well as mathematical symbols). The iPad, and Android tablets, do not share this feature so these devices often rely on capacitive touchscreens and software enhancements.

Apple’s mantra has long been minimalism and a stylus would hinder that. Both Apple and Android devices are happy to let third parties take care of the niche crowd that prefers to write onto their tablets rather than peck at the on-screen keyboard.

If you don’t type much on your tablet or you are one of the few who has mastered touch typing on the screen, attaching a physical keyboard may not be necessary. But, for many there is still a real sense of dependency on bouncy keys and a mouse pad. I personally prefer handwritten input on my tablet, and more recently SWYPE, but there are many users who either type very fast or prefer the feel of a physical keyboard for their inputting. So far software keyboards are becoming more efficient but I can comfortably suggest that convertible-styled tablets with full QWERTY keyboards will remain available for some time to come.

The other option is pairing a keyboard via Bluetooth. Even iPad and most Android devices support Bluetooth, and yet this often translates to limited models of keyboards you can pair with companies like Microsoft and its Bluetooth Mobile Keyboard 6000 making an impact and Logitech’s DiNovo Mini deserving special mention.

And of course there are your fingers. The best thing Apple did for the tablet PC market was show developers how to make using a slate fun again. Tiny menus, uncomfortable stylus motions and needless gestures were gone in favor of simple, two fingered taps, swipes, pinches, and slides.

It doesn’t work for everything and for sure it required a high level of responsiveness from the screen that capacitive technology only recently made possible, but now that it is here, it’s hard to imagine anyone wanting to go back. If I had to list my favourite of the Apple innovations at this stage it’s the little hovering magnifying glass that comes up when selecting text with my finger. PURE GENIUS! Get rid of my iPad and give me that on a Windows tablet and we’re leaps closer to geek heaven!

And even without hardware, software advances continue to make the touch interface faster and more versatile. Take the input of text on a touch screen with your finger. It is often slow and riddled with mistakes. Misspellings, autocorrect issues, and fat fingers are all problems that make standard input, even on a digital QWERTY keyboard complicated – let alone a touchscreen.

So when I look to the future what am I excited about? It’s software like SWYPE which is designed to help limit the number of problems people have with touch screen text input. The algorithm works to predict several possible word combinations in multiple potential languages, allowing you to quickly and easily swipe your finger across the keyboard and generate words without hunting and pecking. Instead of the predictive technology that attempts to guess what you are saying, SWYPE takes the first letter you hit with your finger or stylus and the path you trace across the screen and determines which word you are typing. We’ve seen SWYPE effectively used on the Samsung Galaxy S (phone) but on a Windows 7 tablet in particular, SWYPE is a fantastic addition because it provides an intuitive, intelligent digital keyboard that is generally very accurate at picking out your next word. Watch the video by Stephen Fenech (TechGuide.com.au) and tell me that SWYPE on a 10” Windows tablet doesn’t put a smile on your face. Currently available only in a limited BETA it still gives a good taste of things to come.

It will be interesting to see whether developers can continue bridging the gaps between intuitive touch interfaces and the power applications that consumers need to get work done. Integrating other input devices is effective for now, but many users (myself included) are waiting for the day when everything we do on a PC workstation can be done on a tablet without degrading the experience. It’s not to say we will never again use a desktop computer, but the option to take anything on the road with you is part of why the last 14 months of tablet development has been so exciting – we are getting closer with each passing week and every new app release.

What I want to hear is – how the hell are you using your tablets? And what is your preferred input? Or are you, like many, watching some videos, punching some cats, making some birds angry and nothing else!  Personally I need more out of life and that’s what keeps me passionate about tablets! As iPad 2 is but a handful of days away I wonder if there has been a development in capturing text or has Apple decided the on-screen keyboard is enough?