Under the guidance of Steve Jobs, and other key Apple employees, the iPhone has made a huge mark on the smartphone and consumer electronic market. By daring to go against the grain, ditching a keyboard and going with a large touchscreen, Apple changed the face of smartphones.

This is quite evident in the fast evolution of Android smartphones when you compare those leaked out before the iPhone and those which came to market after the iPhone. 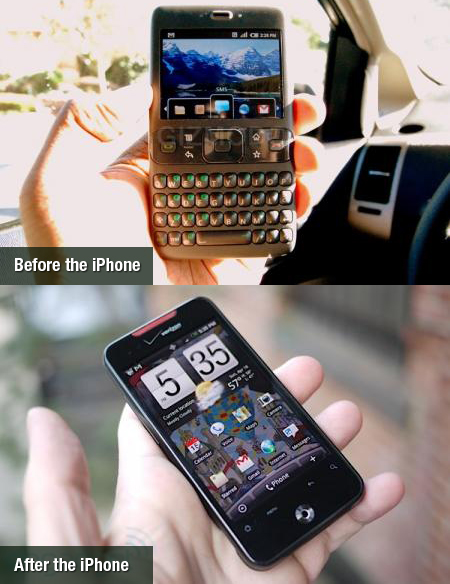 Really, the competition is what drives our industry. If there was a clear titan with absolutely no competition it would be a boring industry. Thankfully, we have many players in the smartphone market, which means that now it is Android’s turn to teach the iPhone a few things. This continual back and forth is what keeps delivering better looking and better performing devices.

The same can be said for the tablet market, which has gone from a specialty niche market to a mainstream consumer purchase. Several sources have compared the design of Windows tablet PCs before the iPad to Windows and Android Tablets after the iPad. While you can’t argue that there is a change in many of the tablets devices sold today, the Windows tablets shown in this example are designed for specialty industries, rather than to be a general use consumer device.

It is worth noting that, the HP TC 1100 (a slate with a detachable keyboard) and several convertible tablet devices provided a more design centric and user friendly way to use a tablet PC — and put productivity on the iPad to shame. 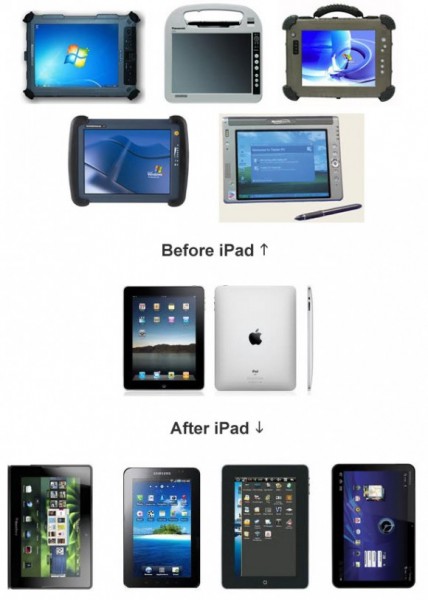 Tablets before and after the iPad

In an interesting turn, we are seeing a growth of iPad accessories to add rugged protection (like the OtterBox Defender), handles (like the Belkin Grip 360), iPad styluses and matte screens to the iPad.

With Windows 8 around the corner, and Android tablets finally maturing enough that they offer a minor threat to the iPad we’re in for a year of fast paced change on all platforms. I predict that 2012 will be one of the most exciting times for tablet PCs in recent memory, and can’t wait to share how all the players try to one up each other.