How To Set An Android Lock Screen PIN, Password or Unlock Pattern

Locking your Android smartphone with a password, PIN or unlock pattern is your first defense against those who would use it for malicious purposes like stealing your info or sending joke texts to your friends and family. Many people think that using a method like this just takes too long and makes turning on a phone just that much harder by adding seconds to the process. Not to mention thinking.

To those of you who feel this way I say this: get over it. You don’t want to wish that you’d done this after your phone is stolen or misappropriated by a “friend” with a penchant for pranks that aren’t funny or snooped in by a suspicious or jealous boyfriend/girlfriend/partner/husband/wife.

Take a few minutes to set up some basic security and put up with the extra 1 – 2 seconds it adds to unlocking the screen.

Related: Northwestern’s Reality Check Tech Security Campaign Is A Good Lesson for Everyone

Go to Settings > Security (might be listed as Location & Security) > Set Up Screen Lock. Here you’ll be presented with three choices: Pattern, PIN or Password 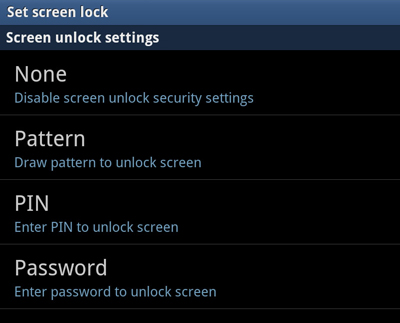 Pattern unlock involves a grid of 9 dots on which you draw a pattern. It should be something easy to remember and can be done one-handed. This is probably the easiest method, but isn’t the most secure.

The pattern must connect at least 4 dots. You don’t want to create one that’s too easy to figure out — just as with a PIN — but you also don’t want to make it so complex that you forget it. Also keep in mind that you can’t use a dot more than once, which cuts down on the number of patterns you can make. 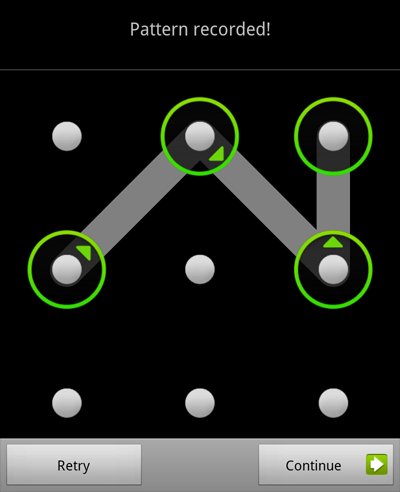 Once you enter your pattern and the screen says Pattern Recorded! hit Continue. On the next screen enter it again to confirm. At any time before this you can hit Retry to draw a different one or Cancel to start over.

Once the pattern is saved Android will return you to the Security screen where you have some extra settings to consider. 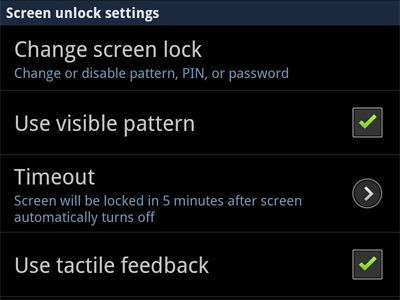 Visible Pattern: when this is checked, you will be able to see a color trail as your finger traces the pattern. When unchecked, you won’t see the trail, so you’ll have to trust your fingers. This is more secure since it will hamper a person’s ability to see the pattern and copy it.

Tactile Feedback: Your phone will buzz as you hit each circle.

Timeout/Lock Phone After: Jump Down.

Most people are familiar with PIN numbers for their ATM card and voicemail, and this is pretty much the same. Unlocking with a PIN means numbers only. You can use just 4 or up to 16 numbers. 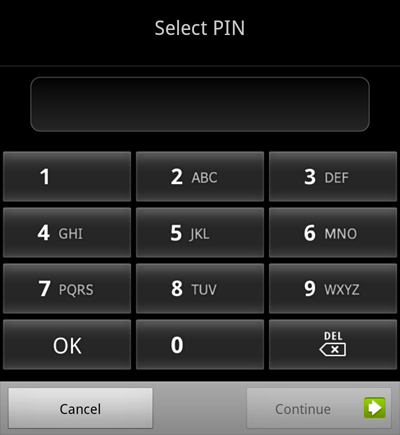 The more numbers you use, the harder it will be to crack. If you already have a PIN number you use for other things you may be tempted to apply it to your Android phone as well. I suggest adding an extra number at the beginning or end to add a layer of security.

After you enter the PIN you’ve chosen, press Continue and confirm by entering it again. Once you hit OK the PIN is set. At any time before this you can hit Cancel to start over.

Once the PIN is saved Android will return you to the Security screen where you have one more setting to consider. Jump to Timeout / Lock Phone After.

Passwords utilize both numbers and letters for more advanced security. The password can have up to 16 characters, but if you want to unlock your phone fast, you can choose something with just 4 characters. A mix of letters and numbers is harder to crack. 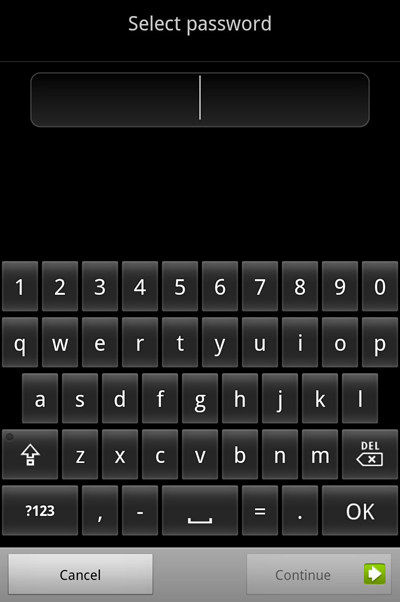 Like any other password, you want to pick something that is easy for you to remember and hard for others to guess. Do not use ‘password’ or ‘phone’ or ‘android’ please, I beg you.

The password field will also accept punctuation alongside letters and numbers, but as those usually require a long press or switching to a different keyboard screen they’re less convenient.

After you enter the password you’ve chosen, press Continue and confirm by entering it again. Once you hit OK the password is set. At any time before this you can hit Cancel to start over.

Once the PIN is saved Android will return you to the Security screen where you have one more setting to consider: Timeout / Lock Phone After.

After you set your pattern, PIN or password there will be an extra setting on the Security screen. It may say Timeout or Lock Phone After, depending on your phone and Android version. This setting is different from the screen timeout, which determines when your phone goes black if you don’t turn it off yourself. Instead, this setting determines how long until your phone requires the higher security unlock. 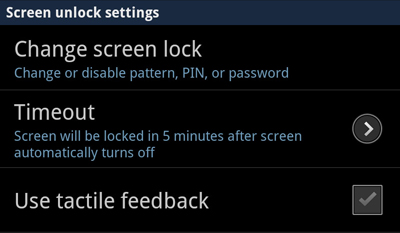 For example, if you have your display set to time out after 2 minutes but the lock phone doesn’t activate until 15 minutes after, you can turn on and use the phone without a security barrier 3 minutes, 5 minutes, even 14 minutes after the screen turns off. At 15 minutes the phone will ask for a pattern, PIN or password.

Lock Phone After gives you a varying number of choices depending on the phone. The first is to lock phone Immediately or after anywhere from 5 seconds to 30 minutes of inactivity. 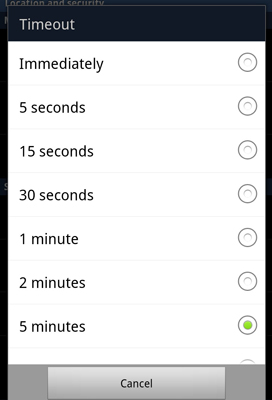 The range of options here will vary by phone

Immediately means you’ll need to use your code every time your phone’s screen turns off, whether you do it manually or it times out. Choose this for maximum security. If you often pick up your phone for short bursts, put it down, then pick it up again and don’t want to enter the code each time, use one of the longer settings.

Now you’re all set with a basic and easy security barrier.