The HTC One M9 is an impressive phone with plenty to offer, but now that it’s in the hands of buyers we’re getting lots of questions regarding Android 5.0 Lollipop, the Sense 7 user interface, and how to do things like changing the keyboard. Thankfully with Android users have a lot of options, and below we’ll explain how to change the HTC One M9 keyboard.

On March 1st the HTC One M9 smartphone was finally announced and revealed after months of leaks, rumors and speculation. It came as no surprise thanks to a variety of leaks, but sadly didn’t feature many design changes from last year. It still has plenty to offer and is the latest and greatest phone to hit the market, aside from the Galaxy S6.

When you get a brand new smartphone there are obviously some things you need to do. Get it turned on and all setup. Sign in and sync your Google account, Facebook, and all the usual stuff, but if you want to change the keyboard a few of the settings changed in Android 5.0 Lollipop. It’s still super easy, and below we’ll explain how to change it. 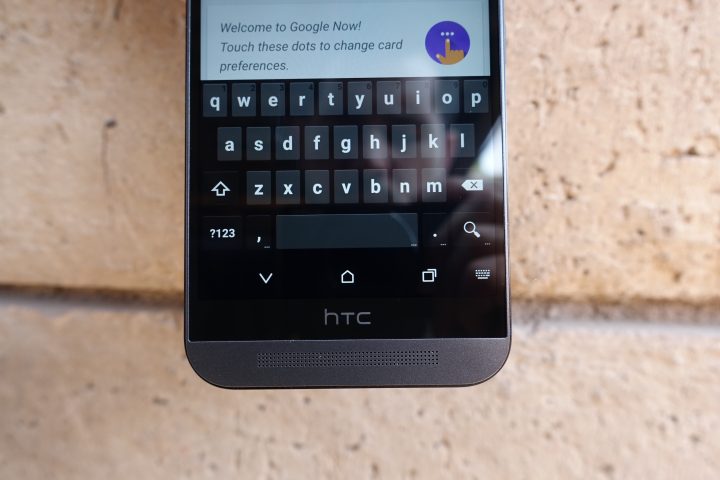 In previous versions of Android a notification icon appeared on the top of the screen when you’re not using the stock keyboard, and it was a persistent notification. Google’s now moved this to the bottom on Android 5.0, and the settings options are slightly different too. There are a few new steps, but changing it on the One M9 is rather easy.

HTC has their own keyboard on the One M9. It has plenty to offer, like swiping with your finger using HTC Trace, and more, but many owners will want to try something different. Personally I use Google Keyboard, but Swype or SwiftKey are two extremely popular options as well. Lets change our M9 keyboard to something a little better.

To start you’ll head into settings by tapping the gear-shaped icon in the notification bar, then scroll down and select “Language & keyboard”. Then tap where it says Current Keyboard. This menu will have all the options you need. From changing keyboards, to choosing a different theme for the current keyboard.

If you’ve recently downloaded a few different keyboards from the Google Play Store you’ll need to activate them first. So once you tap current keyboard, the popup won’t show them, but will let you  “Choose Keyboards”. The next page lets you turn on or enable any keyboards you wish to use. Personally this method seems like a waste of options, and an extra step, but this is the change Google and HTC has made.

Once you’ve enabled and turned on the keyboard options you downloaded, hit back, then select Current Keyboard again, and now you can choose from the newly updated list of keyboard options. Here we selected Google’s keyboard, and that’s it. You’re all done. Not the easiest or most straight-forward method, but it works.

Read: How to Use HTC One M9 Emoji

Now in this same menu you can go into each keyboards options to change things as you’d like. For example, click Google Keyboard, appearance, themes, and select a different style or color. They have four available. Google’s own keyboard or others like SwiftKey offer tons of customization, all manageable right from this same menu.

Overall the new change to selecting keyboards in Android 5.0 Lollipop is a bit convoluted and confusing, but once you figure it out and turn them all on, it’s rather easy to switch back and forth in a matter of seconds. You can also long-press spacebar in the Google Keyboard to instantly head into settings and choose your keyboard of choice, or revert back to the stock HTC option. Enjoy your new phone, and try out a few different keyboards for even more options.