Just like most Android smartphones made by someone other than Google, the HTC One M9 has its very own app for sending and receiving text messages. Rather than use Hangouts or Google’s stock Messenger app, HTC, Samsung and others create their own tailored around their own user interface guidelines. Here though, we’ll explain how to change the default text app on the HTC One M9.

The HTC One M9 was announced on March 1st after months of rumors and hype, and finally hit all carriers in the United States on April 10th. It runs the latest Android 5.0.2 Lollipop and a new Sense UI 7.0 interface made by HTC. The phone has a lot to offer, and a new text app can make it even better.

Most stock text apps aren’t all that appealing (we’re looking at you Samsung) and they’re not very customizable either. Thankfully the power of Android means you can download any of the hundreds of text messaging replacement apps from the Play Store, set them as the default option, and use them with ease. You can even change the notification icon, add quick compose features to the notification bar and more. Lets get started.

HTC’s new One M9 has a powerful new theme engine that lets you change the entire look and feel of your device in seconds. It changes the wallpaper, backgrounds, colors of apps and headers, and even the icons for some apps. That said, the messenger app remains to same, but luckily we can change that with ease.

When you replace your stock app with something from the Play Store you’ll probably be able to customize it with themes, change the look of the message bubbles, customize font, and more. It all varies on which you choose to download, and the link above details a few of our favorites, then the guide below will help you change it.

Starting with Android 4.4 KitKat in late 2013 Google made changing the stock text message app on Android devices extremely easy. There’s a dedicated option in settings that turns one on and the other off, so you won’t get double notifications from both the stock app, and the new one you install.

First things first is you’ll want to navigate to the Google Play Store and download one of the many different third party text apps. Textra is our favorite, GoSMS is popular, and a few others made our list above. Download it, and you’re set. Some even change the settings for you, or just follow the next few steps.

Head into settings by pulling down the notification bar and tapping the gear-shaped icon, or just find the settings app in the application tray. From here the last option in the first column labeled “More” is where you’ll want to tap, then the second option is “Default messaging app“. Select this.

Once you’ve done this you’ll now see HTC’s own Messages app, Google Hangouts, and whatever else you downloaded. Again, we use Textra, so that’s what is shown and what we’ve selected as the default texting application to send SMS and MMS messages. Now all you need to do is select the text app of choice, and you’re all done. 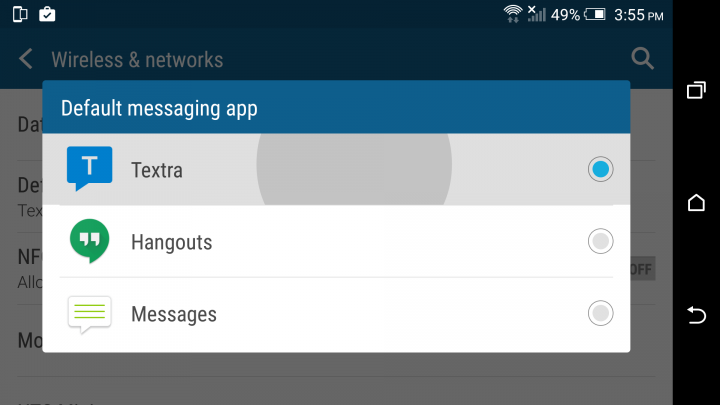 Now when you send and receive messages they’ll be done through this app, vs the one that came installed out of the box. Move the Textra icon to your main home screen, or the bottom bar with your most popularly used apps, and you’re all done.

Textra and most 3rd party apps offer tons of customization, font size and color, themes, and bubble colors, so head into settings and customize it as you see fit. If you want to go back to the stock option, just go back to settings > more > default messaging app > and select the regular one. It’s that easy.

Enjoy a better text message experience on your HTC One M9, and give other text replacement apps a try and find what’s best for you.