Those who love the Kindle Fire but want to surf the web or write emails in a language other than English have had to contend with the tablet’s word suggestion engine, and apparently it’s really annoying. Since there’s no way to turn it off, the next best solution is to switch to a keyboard for the language you want to write in, correct?

You could if the settings were accessible, which they’re not by default.

Never fear, someone has solved this problem. Teleread pointed out that Gero Zahn, a German blogger and Kindle Fire owner, figured out how to access the hidden international keyboards on the device. Even better news: it doesn’t require rooting. It will require time and a willingness to do some jiggery-pokery. 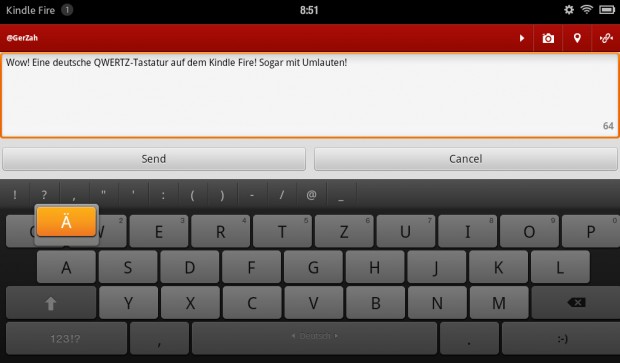 You’ll have to install some unauthorized apps on the Fire, but that’s easy to do. These won’t fundamentally change how the tablet looks or acts, so don’t worry. Once you’re done you can create shortcuts to hidden settings and menu items.

These instructions will work for more than just switching keyboards. You can also access other hidden screens, such as the battery usage monitor. As long as it exists in gingerbread, you can get to it.

Head over to Gero Zahn’s blog for the full set of instructions. I wouldn’t be surprised if this also worked on the Nook Tablet.