If Google Play won’t download app updates or even install new apps, this error message is what most users will see. The Google Play error [RPC:S-5:AEC-0] shows up on Android 4.0 and higher and commonly appears after an update to Android 4.2, though that’s not the only reason.

Google offers a way to fix Google Play app download errors, but this multi-step process doesn’t work for many users. Thankfully there is a simple fix, which we share in the video below. 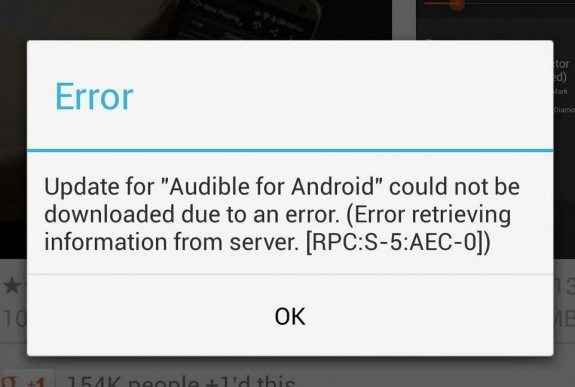 How to Fix Google Play error RPC:S-5:AEC-0. If Google Play apps won’t update or install this is a quick fix.

The video below will show how to fix Google Play can’t download apps and app updates in under a minute. There’s no need to reset the phone or wade through deep framework settings, just remove and re-add your account.

To get started, go to Settings. Once in settings look for Accounts. The location varies from device to device, but it is normally near the middle of the main settings page.

Once on accounts, tap on Google Accounts.

In Google Accounts, scroll down and tap Remove.  When prompted agree to the pop-up warning that this will remove the account.

Next tap on Google Play. Agree to the terms and conditions.

After this is completed, updates should start working immediately. If they don’t, try restarting the phone.

This will turn syncing on and get the phone back to where it was before we removed the account.

This should fix the Google Play error RPC:S-5:AEC-0 on phones running Android 4.0 and higher, but if it does not, users may need to perform a hard reset.