By now, I am sure everyone knows that Swype doesn’t work on the Galaxy Nexus. I expected them to have already worked on a version compatible with both ICS and the 720p screen resolution that the Galaxy Nexus sports since the unlocked GSM version had been out there a few months already. That’s wasn’t the case and we, the owners of the Verizon Galaxy Nexus, are waiting patiently. Well, patiently isn’t a word I can use for my own anticipation. I have been checking all over for the last couple weeks waiting for the real thing to become available.

Apparently, with the Holidays, I wasn’t checking too closely. On December 22nd, a modder over at XDA-developers named theb1rdm4n fixed Swype!

As I mentioned in the post I made here offering alternatives to Swype in the interim, Swype knows we want a version for the Gnex and in the tweet below, confirms that they are working on it.

I have no doubt that you are working on it Swype, but someone beat you to it.

The XDA-Developers member theb1rdm4n posted early on the 22nd that he had the answers. He posted on XDA and included a link to instructions on installing it on Google+ as well. I found out about this on the Swype Support forums. There was a comment there to search Droid-Life.com for the answer. I found the answer, downloaded the APK and I was in business. 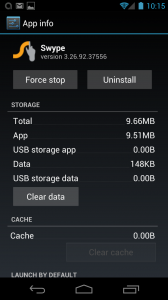 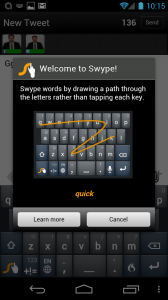 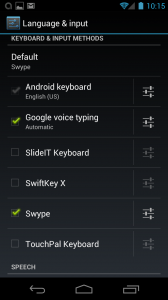 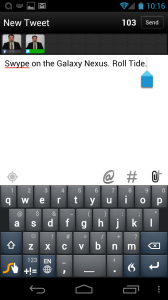 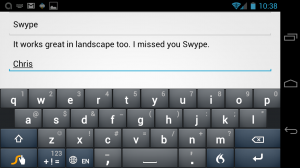 It works great on the Galaxy Nexus in both portrait and landscape and I haven’t found any gotchas yet.

Thanks Anthony Casagrande aka theb1rdm4n for coming up with this fix.