Those not looking to wait have options though. As we’ve shown you with the Nexus 7 and Nexus 7 3G Android 4.2.2 updates, Android 4.2.2 can be manually installed thanks to Google. Fortunately, owners of the GSM Galaxy Nexus have the same access afforded to them.

Yesterday, the GSM Galaxy Nexus started receiving its upgrade to Android 4.2.2. However, the update only rolled out to owners of a specific Galaxy Nexus variant called the ‘takju’. The Takju Galaxy Nexus is the Galaxy Nexus that is sold through the Google Play Store.

Today, the other version of the GSM Galaxy Nexus, the ‘yakju’ Galaxy Nexus saw its Android 4.2.2 update start rolling out. The Takju Galaxy Nexus is the variant that is sold through channels not called the Google Play Store.

As we’ve stated, both updates are rolling out slowly. Those not wanting to wait though will be happy to know that there are a few ways of getting both Galaxy Nexus Android 4.2.2 updates up and running this minute.

The first way to try and prompt the update is through a simple trick using Google Framework Services. The trick is hit or miss but it’s still worth a shot for an easy attempt at getting Android 4.2.2 right now. Here’s how to do it.

5. Head back to the Galaxy Nexus’ Settings, go to About, and check for a System Update.

Again, this is a method that may only work for a small percentage of owners but it’s worth a go for those that may be feeling impatient in regards to the OTA update.

If this doesn’t work, there is a way to make to get Android 4.2.2 up and running this very moment, however, it’s going to take a bit of work. The manual installation method is available to both Takju and Yakju Galaxy Nexus owners but we advise only those who are proficient with flashing and sideloading software to do this.

Those that are not familiar with flashing or sideloading software from Google should just wait for the OTA. That said, here is how to get Android 4.2.2 up and running on the GSM Galaxy Nexus. 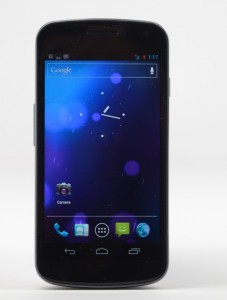 The Galaxy Nexus Android 4.2.2 update is available to manually install.

First, owners need to be running Jelly Bean build JOP40D. Once that is squared away, those running custom recovery on either the Takju or Yakju Galaxy Nexus will want to download the respective Android 4.2.2 Jelly Bean file from Google onto the device:

After that, simply reboot the device into recovery, and flash the zip file that was just downloaded. After a bit of an installation process, the update should be up and running in no time.

Those running stock recovery have a bit more work.

First, download the appropriate zip file from Google’s servers. Next, reboot the device into recovery and choose the “Apply update from adb” option. This can be found by pressing Volume Up and the Power Button when in recovery. At this point, Galaxy Nexus owners will want to plug their device into their PC using a USB cable.

Using a command prompt on the PC, type in adb sideload [Insert Full Zip File Name Here] and the software should start loading up. Once it hits 100%, reboot the Galaxy Nexus and it will be running Android 4.2.2.

Again, if none of that makes any sense, we advise not to use this method and wait for the OTA update which should roll out within the next few days. For those that are going to take the plunge, enjoy Android 4.2.2, its bug fixes and its small additions.