Two days ago, the Nexus 7 Android 4.1.2 Jelly Bean update starting rolling out for owners of Google’s 7-inch Nexus tablet. The update, while not extensive, brings a some bug fixes, enhancements and the ability to rotate the home screen into landscape mode. The bug fixes and stability enhancements are obviously the big things here but the ability to put the home screen into landscape mode is quite nice.

Two days into the roll out however, Nexus 7 owners who haven’t rooted their device are still complaining about the missing update. How do I know this? I am one of those owners. Up until about 20 minutes ago, I was unable to pull the update and remained on Android 4.1.1 Jelly Bean. 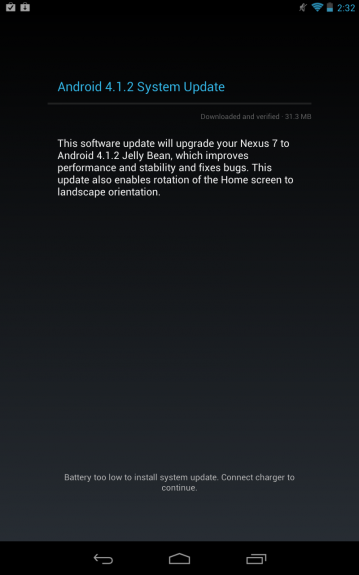 Yes, I plugged it into a charger.

I am now the proud owner of a Nexus 7 running Android 4.1.2 Jelly Bean thanks to a quick little trick that should work for many Nexus 7 owners who still haven’t received the update and don’t want to root the device.

Here is the method I used to get the Android 4.1.2 update downloaded and installed on my Nexus 7 in no time.

When you head back there, the year should be in the 60’s. Check for an update and more than likely, you’ll receive a prompt to install Android 4.1.2 like I did. The installation process is quite quick as the update is only a shade over 30MB. And besides the new landscape orientation, the contents of the update aren’t very noticeable.

However, for those who have been experiencing bugs, this is likely the software that will wipe them out.

The Nexus 7 tablet, Google’s first Nexus tablet, was the first device to Android 4.1 Jelly Bean and now that it has Android 4.1.2 on board, we figure it will likely be one of the first to receive the new version of Android, rumored to be Android 4.2, that Google might show off on October 29th alongside the new Nexus smartphone made by LG. We’ll just have to wait and see.