We have received proof from a Sprint Galaxy Nexus owner in California that the update is indeed rolling out. His Galaxy Nexus was updated earlier today from Ice Cream Sandwich to Jelly Bean.

So, again, the update is rolling out folks, it’s just moving slowly. 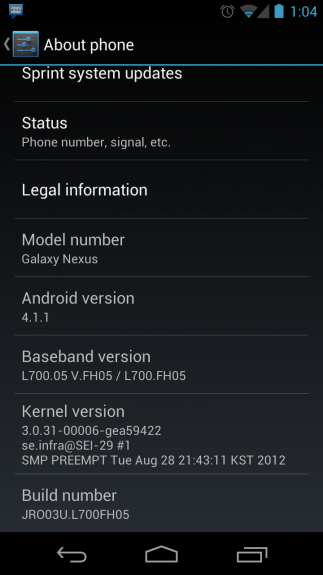 In any event, what’s interesting is how he pulled the update. Instead of getting a prompt, he decided to try a little trick that has worked for some Android updates in the past.

Very simply, he went into the device’s Google Service’s framework and by stopping it and clearing data, he was able to get the Sprint Galaxy Nexus to pull the update from Google.

Specifically, here is how to do what he did:

5. Head back to the Sprint Galaxy Nexus’ Settings, go to About, and check for a System Update.

After doing that, there may be an upgrade to Android 4.1 Jelly Bean waiting for you. Unfortunately, this method may not work for everybody trying to use it.

It’s at least worth a try though as the Sprint Galaxy Nexus Jelly Bean update is rolling out extremely slow and likely won’t hit all devices for a week or more.

In any event, at least we now have proof that the software is indeed rolling out and that should mean that some Nexus S 4G owners are seeing the update today as well.

Sprint rolled the Jelly Bean update out to the Nexus S 4G as well.