Microsoft released mobile versions of Office 365, which includes their suite of Mobile Office apps, like Microsoft Word, PowerPoint and Excel, for iPads and iPhones recently. Users can also get that same suite on most Android smartphones in the form of Microsoft Office Mobile, an all-in-one Office app. But that only runs on smartphones. Until Microsoft makes apps for Android tablets, like they did for iPads, users have to install the suite using a workaround.

We found a way to sideload the Microsoft Office Mobile Android app designed for a smartphone onto a tablet, like the Nexus 7, LG G Pad or Samsung Galaxy Tab and Galaxy Note tablets. We’ll show users how to do this using a couple of free apps. There’s no rooting the phone or hacking the operating system involved. 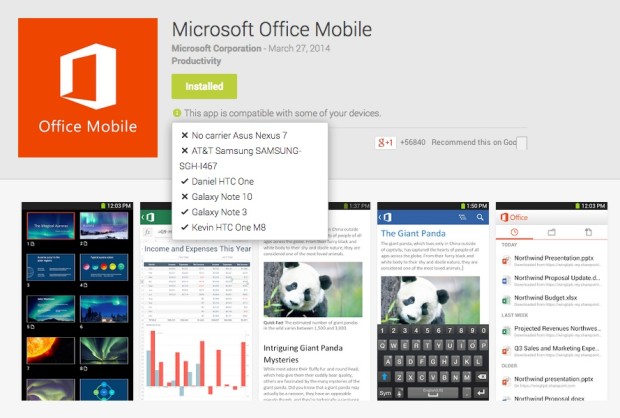 Notice that Office Mobile isn’t compatible with the Nexus 7 or Galaxy Note 10 tablets.

Before installing Office Mobile, users should know that the Office Mobile app doesn’t cost anything to install for viewing files, but a user must subscribe to Office 365 from Microsoft in order to create and edit files on their Android device. The subscription costs $9.99/month for use on up to five computers and up to 5 mobile devices. People with only one computer and one mobile device can get it for only $6.99/month. Users will get a few other perks, like online OneDrive storage and some monthly Skype calling time. Subscribe at the Office365.com page.

Please read What is Office 365: 3 Things You Need to Know

Start out by installing the free Office Mobile app on a smartphone, like the HTC One or a Samsung Galaxy device. When Google installs the app through the Google Play Store it leaves the APK installer file on the device hidden in the system files. To get at the file, users must usually root their device, which involves a complicated and advanced process. However, there’s an app that will do this even on a phone without root access. 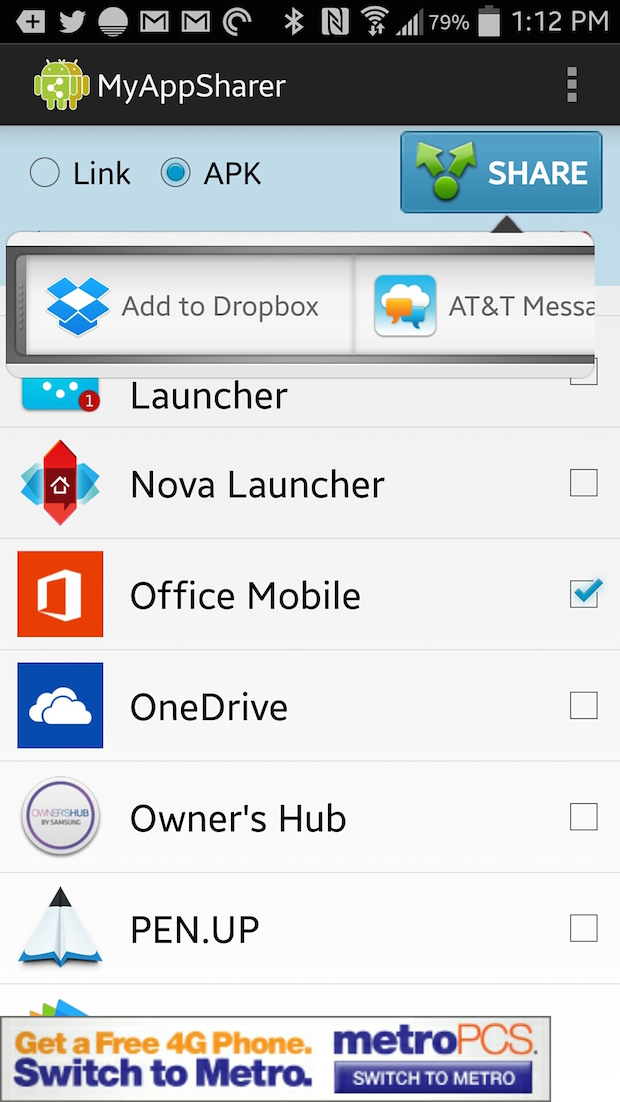 MyAppSharer for Android helps us move the Office APK installer to the unsupported tablet.

Next get an app called MyAppSharer, a free app that finds the APK installation file on the phone and shares it using a number of methods, including:

I used Dropbox to share the Office Mobile APK installation file to install it on a Nexus 7 and a Samsung Galaxy Note 10.1 2014 Edition.

Please do not use MyAppSharer to pirate paid apps and give them to others. App developers work hard to make great apps and we need to support them. If an app is good enough to share with someone, then it’s good enough to pay the developer a few bucks to help them add all those features we’d like to see in the next version. 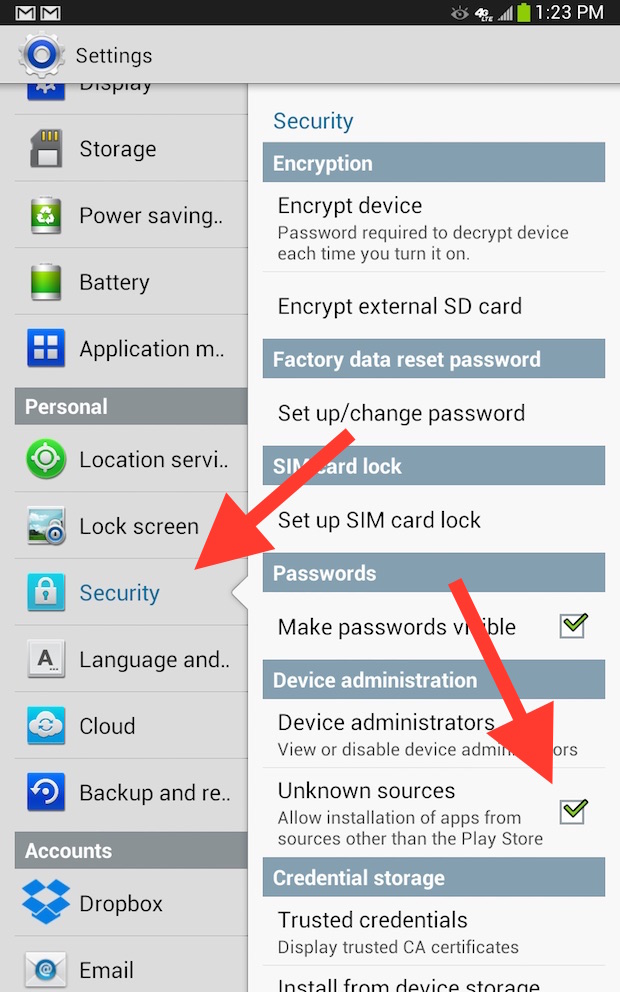 Turn on Unknown sources from the Security section of the Settings app in Android.

The user must tell the Android operating system to allow the installation of apps that come from somewhere other than the Google Play Store. Do this by opening Settings. On most Android tablets, open Settings by swiping down from the top of the screen and tap on the Settings icon, which looks like a gear. Find Security and tap on it along the left side of the Settings app on most Android devices. On some devices the user will need to find the right tab across the top of the Settings screen. In the Security section, look for Unknown sources and tap to put a check mark in the box. This tells Android to allow the installation of the Office APK, even though it didn’t come from the Google Play Store.

Open Dropbox, if that’s what you used to move the Office Mobile APK installer to the unsupported tablet. Find the APK file in Dropbox. I saved it to the main folder so I could find it easily, but some people will want to put an Apps folder in Dropbox. 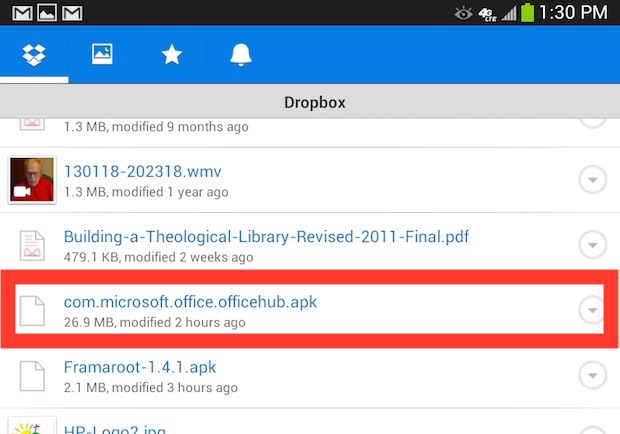 The Office APK installer will have a long complicated name we share it using MyAppShare.

In Dropbox, tap on the APK file name. It will look something like the name in the image above which reads “com.microsoft.office.officehub.apk” instead of a descriptive name like Microsoft Office Mobile. Dropbox will download the APK file and the operating system will start the installation process. Android will ask for permission to install the app. Tap on Install. 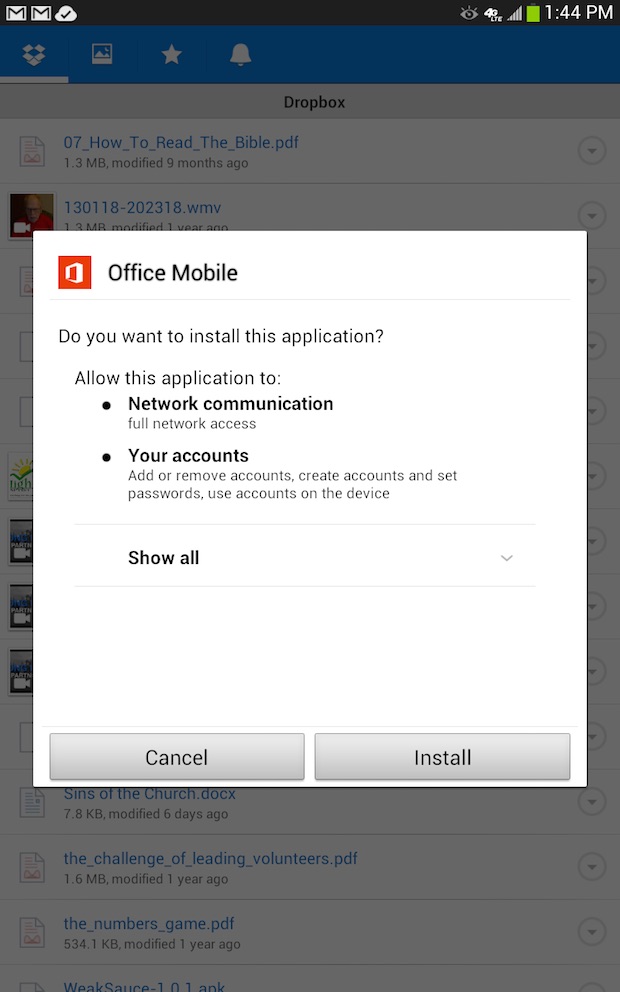 Android will ask for permission to install the app.

When Android finishes installing the app, tap on Open to run it. Enter the registered email address and password to begin using the app.

Users can follow the above steps to move other apps from one Android device to another. For example, I did this with Samsung’s SideSync app, which lets a user view the screen of one Samsung device on another. It comes preinstalled on the Samsung Galaxy Note 3, but doesn’t come on the Galaxy Note 10. Sidesync lets me view the screen of my Note 3 on the Note 10. This way I can plug the Note 3 into the projector at my church and show a PowerPoint presentation on it. Connect the two devices using Sidesync and control the presentation from the Galaxy Note 10 from across the room.

MyAppShare also lets me backup my apps to Dropbox. When I plan to erase the phone and start over from factory default settings, I can easily backup the apps and then reinstall them. Put the micro-SD card in the computer and copy the APK files from Dropbox to the card and put the card in the device after erasing.

Finally, this keeps all of a person’s apps backed up. Sometimes Google or a developer will pull a useful app from their Google Play Store. This happened with Angry Birds. Now users can keep the file and even install it on other devices or other Play Store accounts.