As we head into the New Year, Google’s latest Nexus smartphone, the Nexus 4, remains sold out completely through the Google Play Store with no return in sight. Those who still wish to buy it might be waiting a few weeks before it comes back into stock but that doesn’t mean that you’ll need to check the Play Store every day. Instead, there are three much easier methods of checking for Nexus 4 stock on the Google Play Store.

Since the November, the Nexus 4 has been extremely scarce. The 8GB sold out almost immediately after the device went on sale for a second time through Google’s Play Store and a few weeks after that, the 16GB Nexus 4 displayed the same bold sold out symbol which prohibits customers from ordering the device. The Nexus 4’s bumper case remains sold out as well.

Google has not yet said when the Nexus 4 might be relieved of its supply issues, leaving prospective buyers wondering when they might be able to get their hands on LG’s first Nexus smartphone.

For those who might be looking to order, checking the Google Play Store for availability might have already become a daily ritual. Personally, I used check it every day in the hopes that Google would finally be offering it again because I have no interest in paying exorbitant amounts of money for the Nexus 4 through site’s like Craigslist or eBay. One of the beautiful parts about the Nexus 4, after all, is its price tag.

Fortunately, I decided to cut that daily routine out and move on to greener pastures. What I mean is that there are easier ways to ensure that you’ll be ready to buy a Nexus 4 once the device comes back into stock.

Here now, we show you how to check for Nexus 4 stock through the Google Play Store not only in the U.S., but in other countries as well.

How to Check for Nexus 4 Stock

Google is no longer allowing users to sign up for Nexus 4 stock notifications through email which leaves potential buyers with two options. One, check the website every day to see if the device is available or, download an application that checks stock for you.

The Nexus 4 has been out of stock since November.

The latter is a life saver especially for those that may have fallen into the monotonous, daily routine that is looking for Nexus 4 availability. 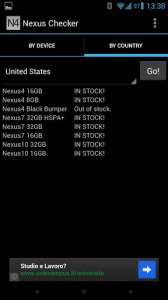 Nexus Checker is a free Android application that can look up the worldwide availability of the Google Nexus devices. Thus far, the application works for every region other than Australia though the developer is currently looking to add the region to the app.

This means that those not only interested in the Nexus 4 but the Nexus 7 and Nexus 10 as well, can download this application and never have to check the Google Play Store again as the software will alert you when stock is available.

The application itself is extremely basic, but it’s also extremely useful, garnering mostly five star ratings from customers who have downloaded and used the application.

Another option is another application called Nexus Availability Checker which does the same thing as the Nexus Checker and offers an easy way for consumers to check for Nexus 4, Nexus 7 and Nexus 10 availability.

The application has received lower ratings than Nexus Checker due to a “donation” for faster refresh times and ads and also because it’s apparently a data hog. Still, it’s an option for those that don’t fall in love with the Nexus Checker app and it is, of course, free to download for Android users.