Apple stunned attendees by announcing, not only a new iPad Mini but also a refreshed iPad with a faster processor, Lightning connector and Sprint availability.

Users can sell an old iPad online on their own through eBay or Craigslist, or can sell the iPad to a gadget resale service like Nextworth, Gazelle and others to cut out the hassles of dealing with potential buyers.

The fastest way to sell an iPad is to use one of the gadget buying services. Let’s get a sample of what these services can do for a 16GB Wi-Fi third generation iPad. 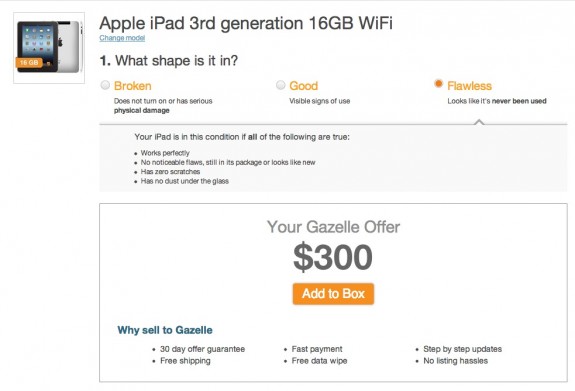 Amazon also offers a trade-in service. They offer the most money for a pristine 16GB Wi-Fi only iPad at $400. However, that gives the trader an Amazon gift card instead of cash. Would-be buyers will have to wait till Amazon offers the new iPads or use the cash for something else.

All of this assumes the user owns an iPad in perfect condition. Prices increase for the iPad with more storage and with LTE connectivity. If the iPad is scratched, dinged or broken features, like a faulty headphone jack, the the value drops precipitously. The video below explains this process.

Users looking to make more money, and who are willing to deal with potentially troublesome buyers, can sell the iPad on eBay or Craigslist. Getting an eBay or Craigslist account doesn’t take a lot of effort, but be prepared to meet potential buyers on Craigslist or spend time shipping the iPad to an eBay buyer.

If an iPad owner doesn’t mind dead beat buyers on eBay or meeting up with a person to sell an iPad locally, then go with one of those services. Despite the high cost of listing on eBay, the extra money might make it worth the cost. Since the new iPads cost from $329 to $499, a user might not have to pay out much more than $130.