We’re all tired of the extra software AT&T puts on their smartphones. One of the worst interrupts users with updates that many users don’t want. The AT&T Live news app will show notifications for new stories that most users don’t ask see. We’ll show you how to get rid of those notices for good without rooting the phone.

Rooting an Android phone refers to a kind of hack that lets users customize their phone in ways the manufacturer or the wireless carrier would rather users not do. For example, Samsung includes a feature called Knox security which will show when a user roots their phone. If a Samsung phone Knox detection feature shows that the use rooted it, Samsung might deny the user warranty service. 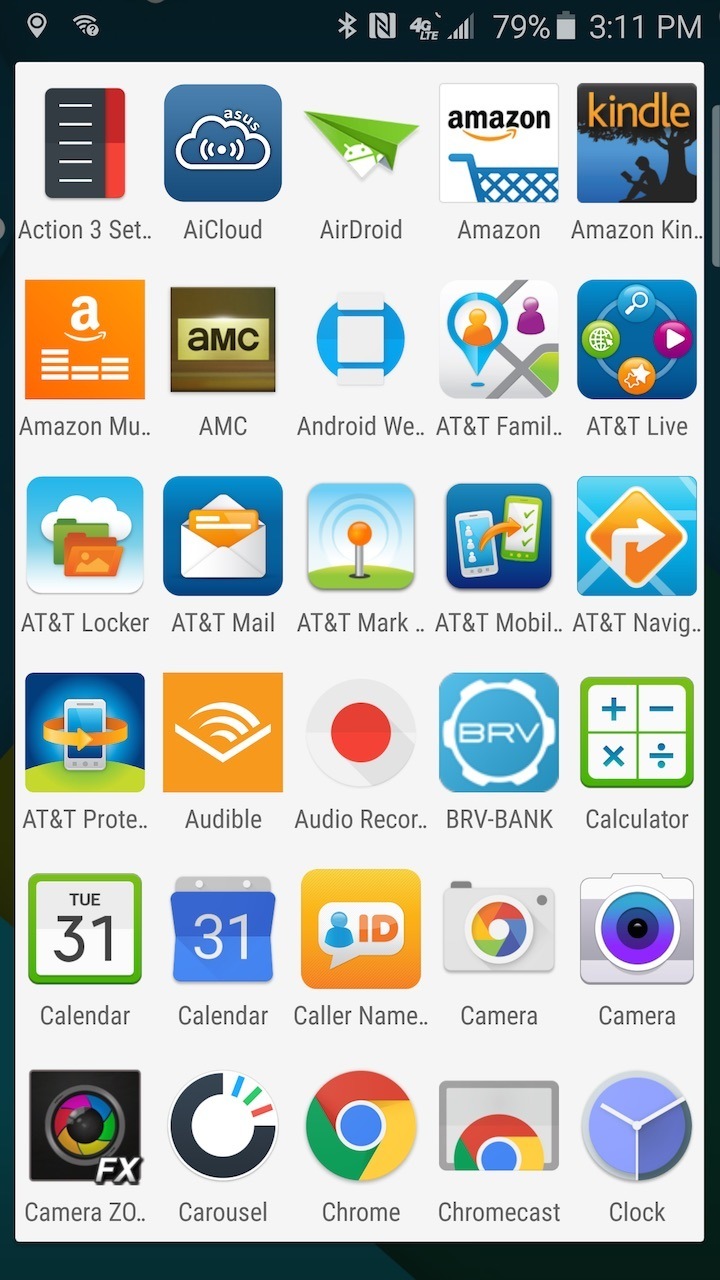 AT&T Live is just one of the pre-installed apps the clutter up their Android phones.

Rooting is the only way to totally remove annoying pre-installed apps like AT&T Live. However, rooting can void the warranty. So disabling the app results in hiding the app’s notifications without tripping the Knox feature in Samsung phones.

This process applies to more than just AT&T Live. Any pre-installed app that serves no benefit to the users can benefit from this disabling process.

What is AT&T Live? 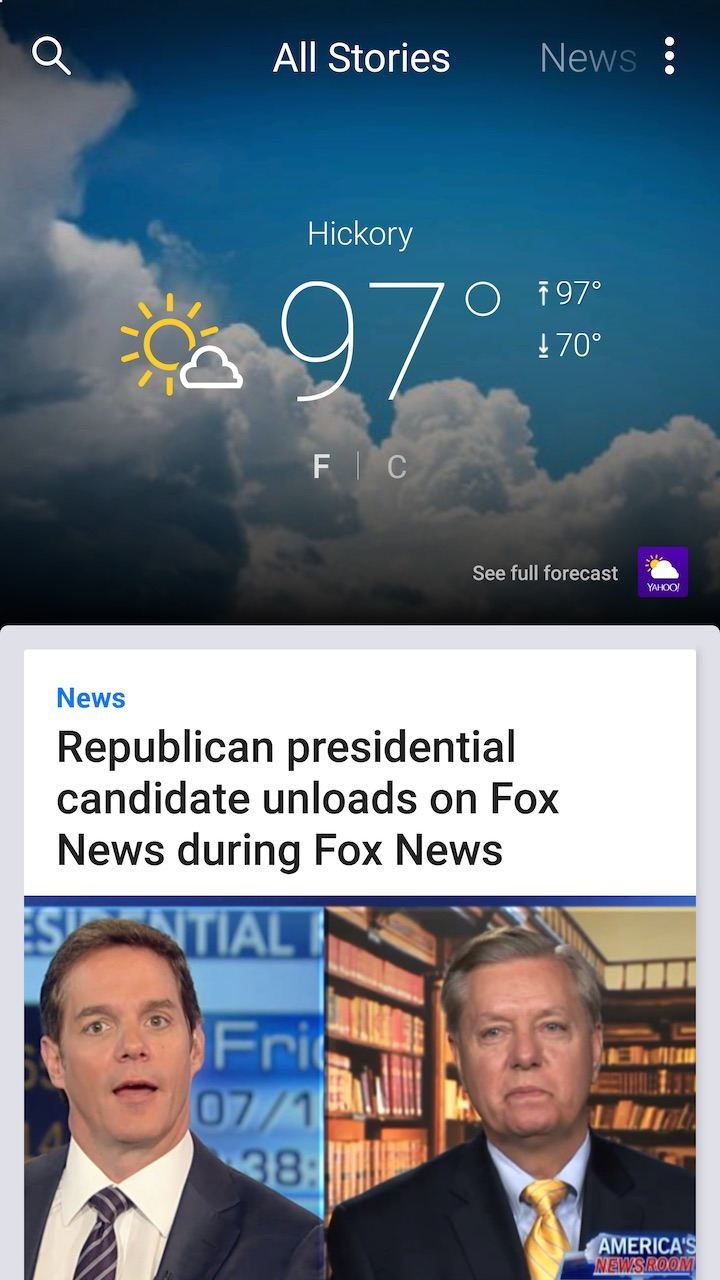 The AT&T Live app shows news stories. Some people may like to get their news from the app. If so, then stop reading. However, some other news apps do a better job of showing news.

Those are just two. Also grab the app for your favorite news channel on TV or newspaper/magazine app. All of these options work better than the AT&T Live app that almost no one would install if AT&T didn’t force it on us.

How to Stop AT&T Live Updates

Here’s how to stop the updates from AT&T Live without rooting the phone. Go into the phone’s settings. This post shows screen shots from a Samsung Galaxy S6 Edge, but the steps will work similarly on other phones running different versions of Android. 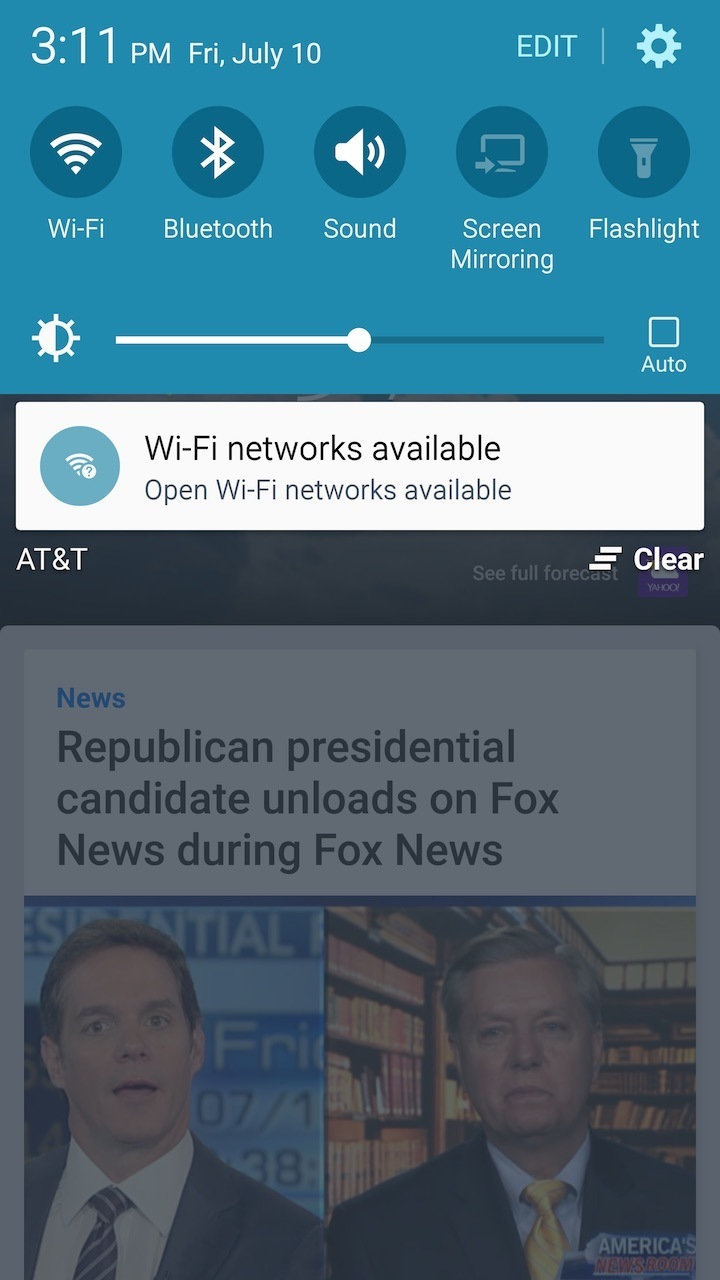 Swipe down from the top of the screen and tap on the Settings icon somewhere in Notifications. Alternatively, go into the phone’s app drawer, the icon that opens the screen that shows all of the apps installed on the phone. Find Settings and tap it. 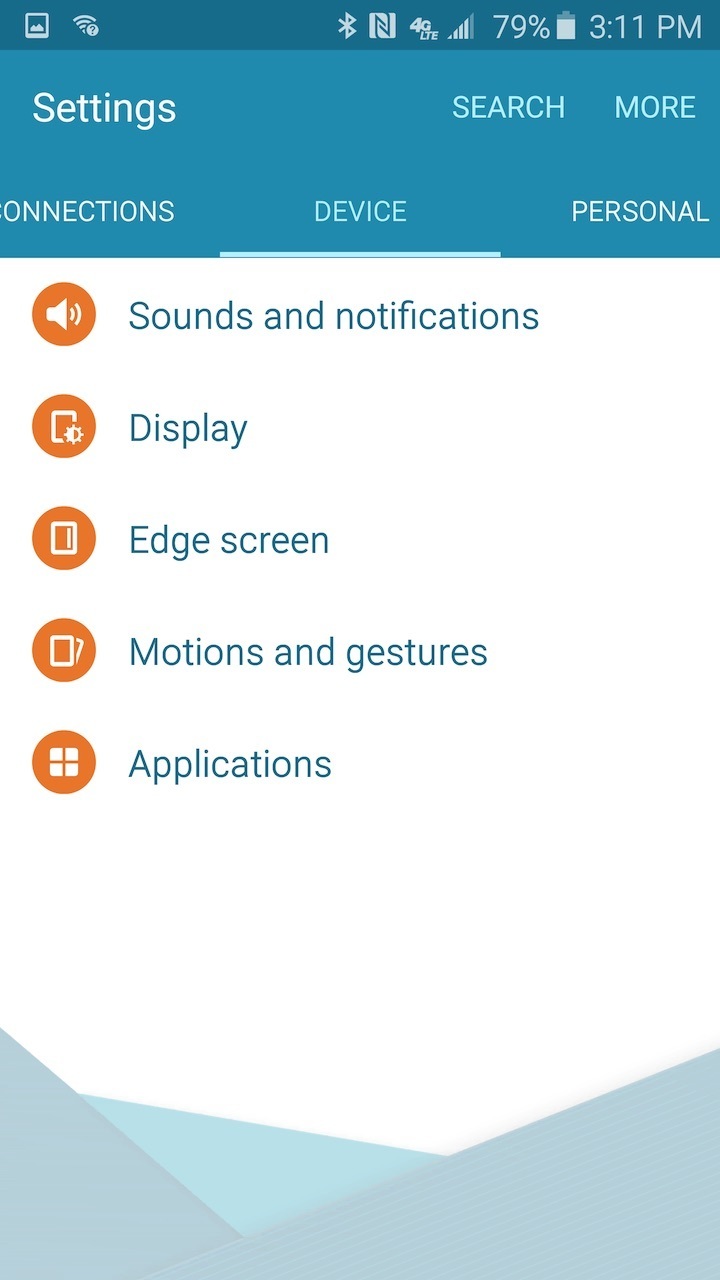 The Applications section of Settings is where you’ll find the AT&T Live app’s customization settings. 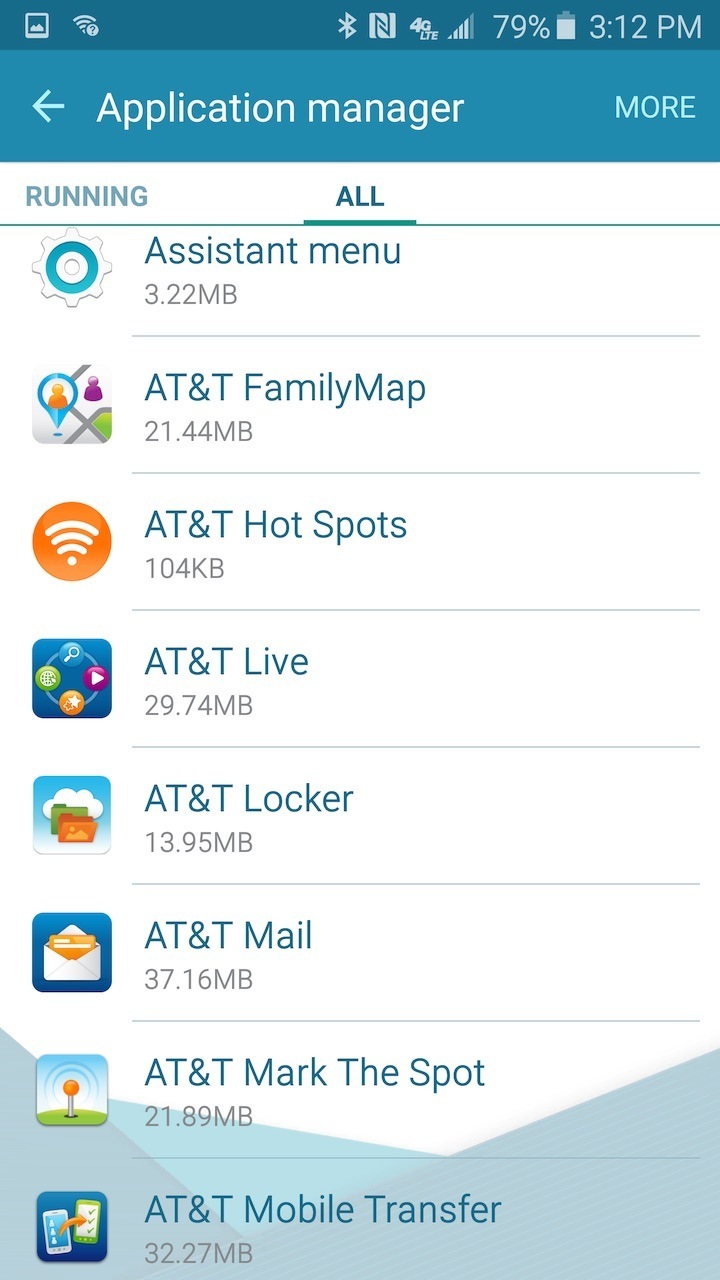 Swipe down untill you see the entry for AT&T Live and tap on it. First, clean up the app’s cruft by tapping on the CLEAR DATA and CLEAR CACHE buttons. Then tap FORCE STOP to close the app. Finally, tap on DISABLE. This stops it from running again the next time the phone restarts. 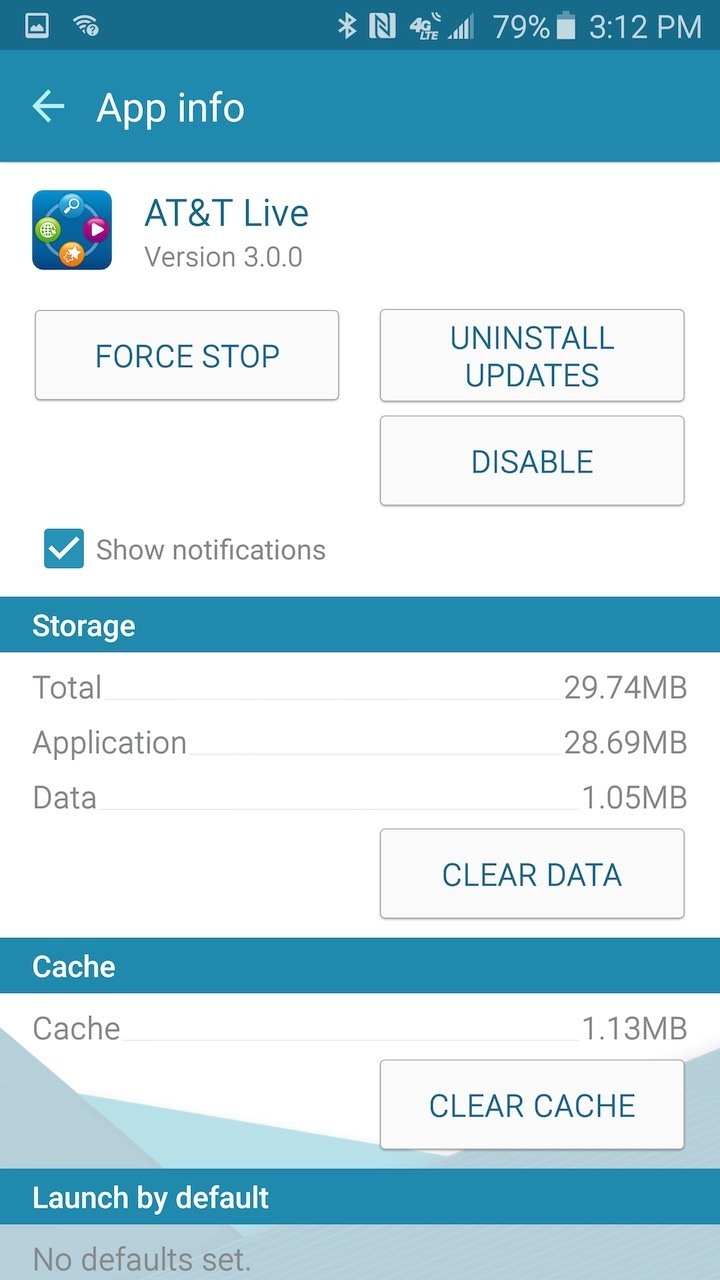 Get rid of the AT&T Live notifications by disabling the app in Settings.

If AT&T pushes an update in the Google Play Store, the app may re-enable itself. Just repeat these steps until the next time it’s updated.

How to Disable Other Pre-installed Apps

This works with other apps too. Look for the other AT&T apps on the list. Be careful, because some apps supply important functions. If a feature that you like stops working, re-enable apps one at a time until the feature starts working again.

After the user disables an app it shows up in the Application Manager on the Disabled list.