WiFi Tether is an app for rooted Android phones that lets you use your phone as a wireless hotspot. This allows users to bypass carriers’ built-in Wi-Fi hotspot software, which is especially helpful on phones that come with unreliable hotspot apps, such as the HTC Thunderbolt.

Keep in mind you must have a rooted Android phone for this to app to work. While most Android users do not root their phones, doing so will allow apps that aren’t sanctioned by Google, manufacturers or carriers to run. Keep in mind that there rooting your phone isn’t without risks.  You’ll also need Root Explorer to complete the install.

Start the app by tapping its icon. Before you turn on the tethering feature do the following:

Now back out of the settings screen to the main screen of the app.

Connect Other Devices with Wi-Fi Tether 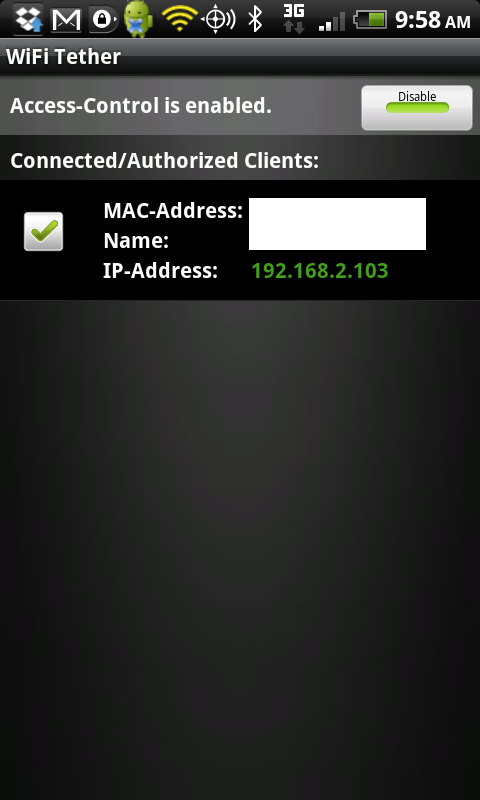 Once your device is connected to the phone’s hotspot, you will have to grant access by doing the following:

This app is no longer available in the Market. Google gave into the wishes of the wireless carriers who want Android users to pay a premium for tethering. This app will allow you to bypass paying this restriction, but we are not condoning such activity. If you use it, you should still pay for tethering service or you might find yourself violating your carrier’s terms. If such activity is detected you could be forced to sign up and pay after the fact..

The best reason for using this app is that it works better than the built-in software on some phones. On the HTC Thunderbolt, WiFi Tether actually serves its stated purpose, while the built-in app is unreliable. The problem almost caused me to return my HTC Thunderbolt.

There are a couple of nice extras in the app, including a battery thermometer. There’s also a bandwidth meter that keeps tabs on how much data been used by connected devices, which can help prevent you from exceeding bandwidth caps.