This is how to turn off film grain & motion blur in Infinite Warfare. In the Call of Duty: Infinite Warfare multiplayer there are two settings that you may want to change to improve the graphics.

If you notice a grainy texture or blur, it is not a Call of Duty: Infinite Warfare problem, it’s a feature. Thankfully you can control the intensity and turn it off.

By default there is a film grain filter and there is motion blur in the multiplayer gameplay. This is supposed to add a gritty, cinematic look to the game. In a campaign mode this can add to the look of the game, but in multiplayer it takes away from the sharpness of the image. 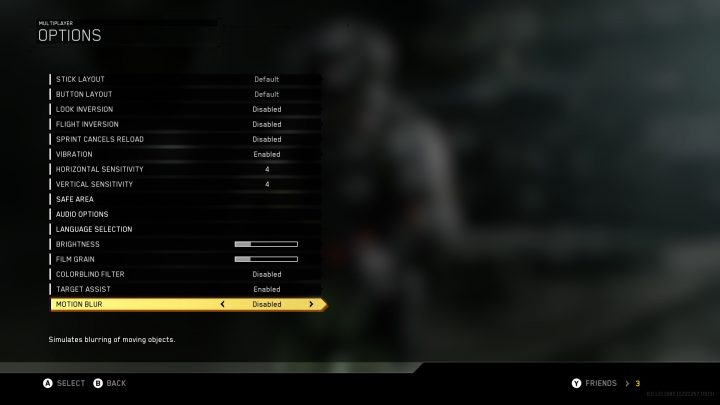 How to turn off film grain and motion blur in Call of Duty: Infinite Warfare.

The motion blur option is also built-in and it can annoy gamers when they play by blurring the gun or the background at various times.

If you don’t like to see motion blur or film grain in Call of Duty: Infinite Warfare, you can turn it off.

You’ll need to go to settings in the Multiplayer part of the game to make this change. You should only need to do this once, but some users report that the settings aren’t saving. This may be fixed with the first Call of Duty: Infinite Warfare patch.

Start a multiplayer game and then when you are in game you need to pause and go to options.

On this screen you can control the film grain intensity and you can turn off motion blur.

You can do this in an online game or in a custom offline game if you prefer to see the effects before playing in a live match.

The video above shows you how this works and where to change the settings. You can always change it back, but most users will prefer the edge that you get from a sharper picture and less blur while playing in online competitive matches.