Apple delivers the iOS 7 update to all compatible iPhone and iPad devices at the same time, with no delay from carrier to carrier, so as long as you own an iPad 2 or newer or iPhone 4 or newer you should be able to upgrade to iOS 7.

The whole look of iOS 7 is different with a new lock screen, all new iPhone and iPad apps from messaging to Notes and much more. It may take a little time to get used to, so if you aren’t immediately sold on the looks, give it some time, but keep in mind you cannot downgrade to iOS 6. The video below shows many of the best iOS 7 features.

The iOS 7 update brings these features to the iPhone 4, iPhone 4s, iPhone 5, iPad 2, iPad 3, iPad 4, iPad mini and iPod touch 5th gen. Not every feature will arrive on all of the devices.

Prepare for the iOS 7 Update

Upgrading to iOS 7 should be straightforward, but there are some steps we recommend users take before tapping Install iOS 7 on their iPhone or iPad.

Read: 7 Things to Do Before Installing iOS 7

While Apple’s updates don’t often cause issues that lead to lost data, just as with any update we recommend users make sure they have completed a recent backup to iCloud or iTunes. From there the iOS 7 update is relatively fast.

How to Upgrade to iOS 7

Users can upgrade to iOS 7 without plugging in to their computer, which makes the update much easier. The directions below will guide you through the iOS 7 update process. Users should connect to a WiFi network to download the large file. Users will also need to make sure their device has at least a 50% battery life.

While the iPhone or iPad is updating you cannot use it to surf the web, send a text or make or receive calls, so make sure you have enough downtime before starting. You will need enough space on the iPhone or iPad to complete the update, it’s note clear how much that is, but if you get an error you may need to delete a movie or uninstall a large app. Plugging into iTunes may let you skip this issue.

Upgrading from iOS 6 to iOS 7 will not delete any of your apps, music, text messages or data. The phone will install the software, reboot and all of your accounts and information will be there.

Update: iTunes 11.1 is out. Users can install it before or after the iOS 7 upgrade process, but we recommend against performing a backup in iOS 6 on iTunes 10.5 and then trying to restore an iOS 7. Essentially it’s a good idea to only update one piece at a time.

1. Open up the Settings App. This is normally on the home screen, but if you cannot find it press the home button twice slowly to open search and type Settings. 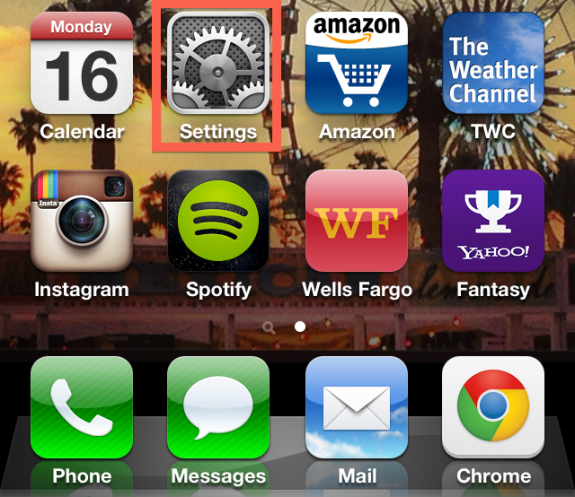 Step one of upgrading to iOS 7.

2. Tap on General, which will open up a list of additional settings. 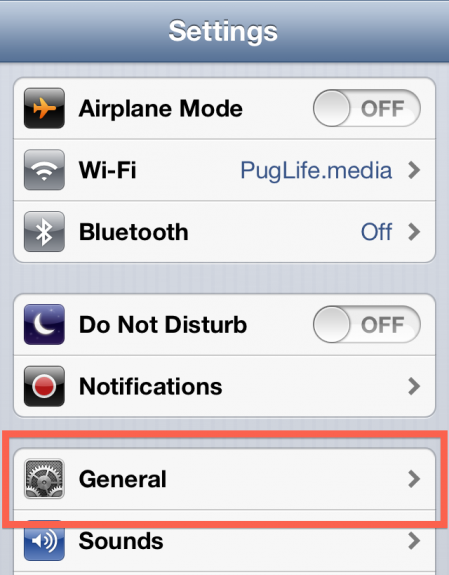 3. Near the top, tap on Software Update. This will automatically look for the iOS 7 update specific to your device. 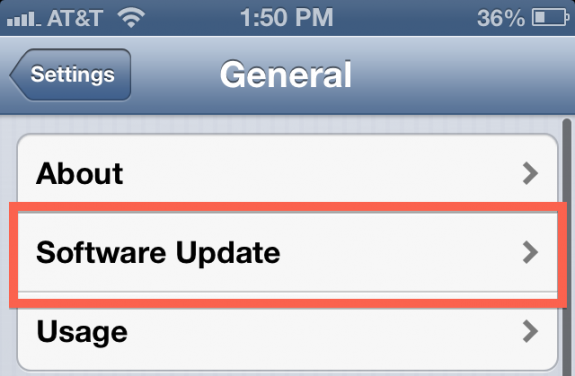 Step 3 of installing the iOS 7 update.

4. After a short wait, the device should show an iOS 7 update available to download. Tap Download and when prompted tap install. You can use the iPhone or iPad while the iOS 7 download is in progress. 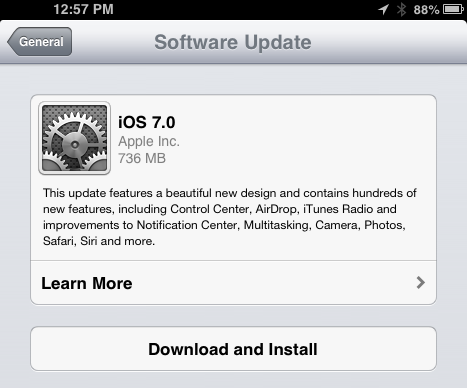 Upgrade to iOS 7 on iTunes

If you wish to upgrade to iOS 7 on iTunes you will need a charing cable, still need 50% battery life, but this method should help users get the update without worrying about space issues.

1. Plug the iPhone or iPad into the computer running iTunes.

2. If you need to, let the iPhone sync and perform a backup. (Optional: Transfer purchases)

Find your iPhone or iPad in iTunes.

3. If you don’t see the iPhone option in the upper right, click on Library. Then Click on iPhone or iPad.

4. Click Check for Update and let the process run through downloading and installing iOS 7.

During this process do not disconnect the device from the computer. Users may find that the iOS 7 download takes a while on the first day. If it is taking too long, users may want to wait and install iOS 7 later.