The Adobe mobile apps found on both iOS and Android help users create amazing projects on their computers. Photos taken with the phone’s camera and the Adobe Capture CC app are turned into a texture usable in any Adobe Creative Cloud app on a computer. The app also finds the colors in a scene, a room or an image. Those colors can be used to design a nice layout in Adobe Illustrator or InDesign. Other apps like Adobe Comp CC can start a layout project using a photo taken on an iPhone. Users can add text and then export it to Photoshop to make a beautiful magazine cover or a flier for their businesses.

The Best of the Adobe Mobile Apps

To get started, head over to Adobe’s website to find the Adobe Mobile apps. You can also search your device’s app store. We won’t cover all of them, but will focus instead on the following mobile apps:

Use apps like Adobe Capture to take what you seen in the real world and create amazing results on your computer.

That’s just a sampling of the three pages of Adobe mobile apps on the page linked above the list. The above video shows some of the features added to Lightroom mobile in the last year.

Start on the Phone with Adobe Mobile Apps

It seems counterintuitive to think that we should start a project on a phone or tablet that we plan to finish on a Mac or PC, but many of the Adobe Mobile Apps intend for the user to do just that. Let’s look at a few examples.

Imagine that a designer visits a beautiful park with lovely natural colors including bright freshly cut grass, beautifully cultivated rose bushes, and incredible trees. The artist can pull out their iPhone and take a photo of the scenes and then use something like Adobe Capture mobile app to take advantage of the color scheme of the scene or the textures of some flower petals, the grass mowing pattern or amazing bark on an old craggy tree. The video below shows how Adobe Capture works. 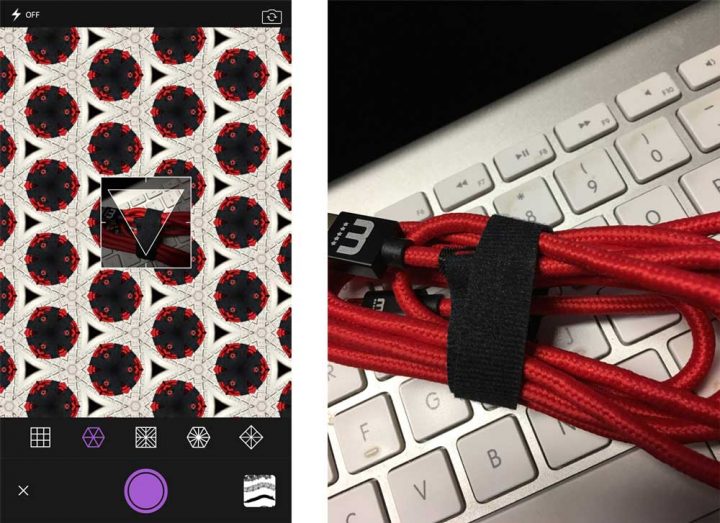 Use Capture to turn a photo into an interesting background pattern. The left photo created the right pattern in Capture.

After creating the above in Capture, the app saves them to the Adobe Creative Cloud that syncs to desktop apps and other mobile apps. This makes them useful anywhere that you can use color schemes, brushes, shapes, vector images and patterns.

While the above focuses primarily on artists and layout professionals, photographers and videographers can also use mobile apps to jumpstart their desktop or notebook Adobe projects.

Fire up Adobe Lightroom Mobile and import your photos. You can either take the images already on your iPhone or import them to an iPhone or iPad with the SD card to Lightening adapter that Apple sells for $29. Lightroom also includes a nice built-in camera app that photographers can use to take photos. 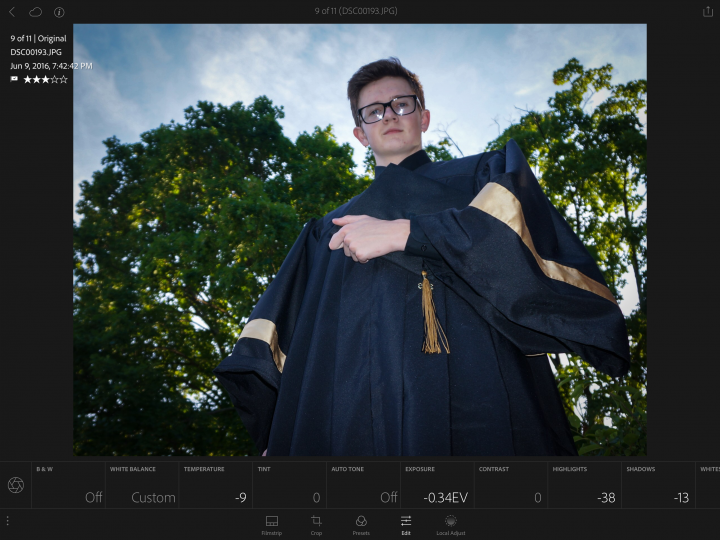 Import photos into Lightroom Mobile, edit them on the iPad and then sync Collections with the web and desktop versions of Lightroom.

Adobe Premiere Clip doesn’t give videographers a full-featured video editing tool. However, they can grab video from their phones and begin a project by trimming and clipping scenes. Finally, syncing them to the computer to do the finished product on the Windows or Mac version of Adobe Premiere.

This gives you the basic idea of starting your projects on the mobile app. Adobe Creative Cloud users don’t just have to think about using a keyboard, Wacom stylus and mouse for input. Make use of the touchscreen phones and tablets that we own already. You can use their cameras, the Apple Pencil or Samsung Galaxy Note 7 pen to work on a drawing or handwritten project. Sign documents on your phone and send them to Adobe Acrobat or just send them back to the person needing your signature.