How to Use Google Cloud Print from Android, iPhone or iPad

Sometimes mobile phone or tablet users want to print documents, photos or PDF files from their device. Google created Google Cloud Print, which makes the process simple, so long as the user works inside Chrome or an app the supports Google Cloud Print.

Google Cloud Print routes the print command from Chrome or a supported mobile app on the smartphone or tablet to the printer over the Internet. 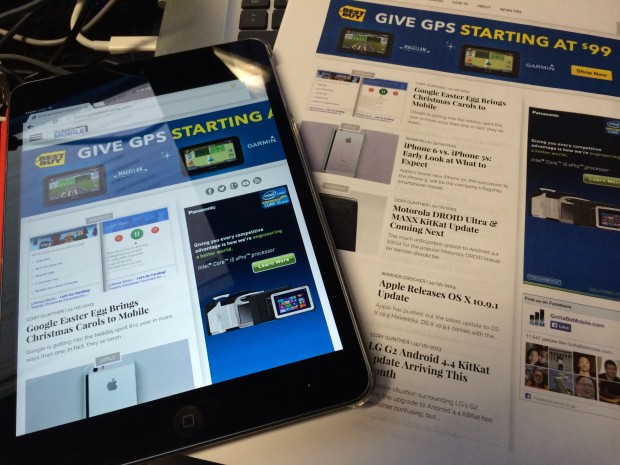 Before printing, the user must set up their printer for Google Cloud Print. Google maintains a list of printers that come with Google Cloud Print built-in. This might influence users in selecting a printer in the future, if they plan to do a lot of Cloud printing. For example, I just bought a cheap color laserjet printer. I made sure Google listed the new Brother HL-3170CDW on their Cloud Ready Printers page before buying it.

Most printers didn’t make the list, so Google still offers a way to use older printers that don’t support the feature. Connecting what they call a “classic printer” is as simple as logging into a Google account from Chrome. Then open Chrome’s settings by clicking on the menu button (see image to the right) in the upper right corner. It looks like three dark horizontal lines.

From the window that pops up, choose Settings and then click on Show Advanced Settings.

Select the printers that should connect to Google Cloud Print from the Printers list along the left side of the window that opens at the end of the earlier series of instructions. Click on Add printer(s) to add them. The Manage print settings used in the previous set of steps will now work for those who didn’t already set this up. Click on it to change printer settings, names or to delete printers.

Notice that the list includes more than just printers. For example, my list above shows an HTC One, Nexus 10 and Nexus 7 as well as two printers, Print to Fedex Office and Save to Google Drive. The last two let users send documents to the local Fedex office that prints for users for a fee. Saving the file to Drive will make it available later. Sending to one of the phones or tablets will make it possible to open the file on the device.

Now we’re ready to print from the Chrome browser. Open the Chrome browser and surf to a web page to print. Tap on the menu button (looks the same as the one shown in image above with the red arrow) and tap Print…. This will open the Chrome dialog box and might ask the user to sign into a Google account. Make sure to sign into the same account used to set up the service on the computer. It may take the user to a page asking them to add printers. This is a Google mistake. Cancel out of that page and it will show the list of printers  and devices set up before (see below). 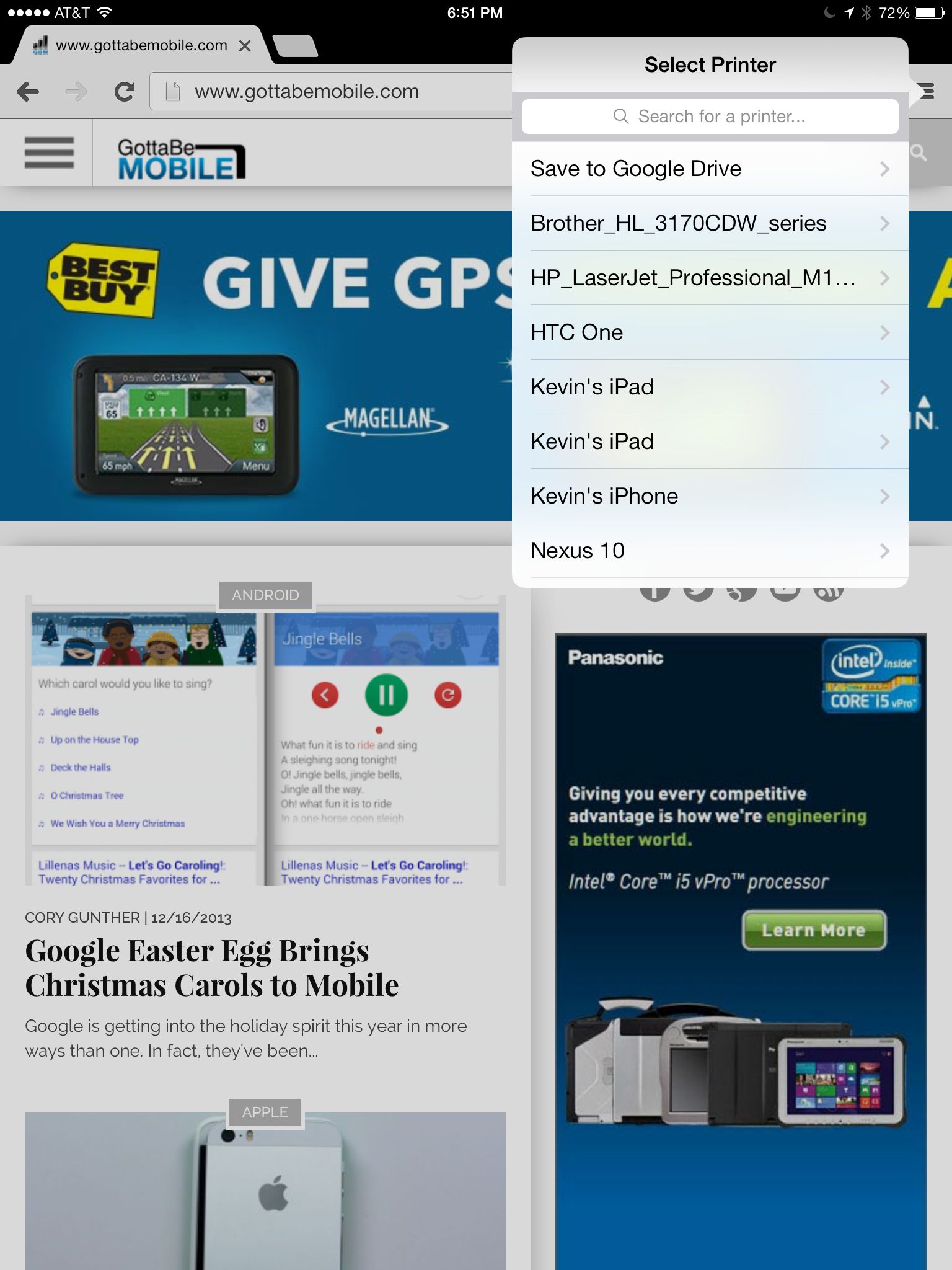 Select the desired printer and a box will open with printing options to choose, like paper quality, duplex printing (if supported) and more (see below). After setting the right customizations for the print job, tap on Print and Google Cloud Print will send the document or image to the printer. 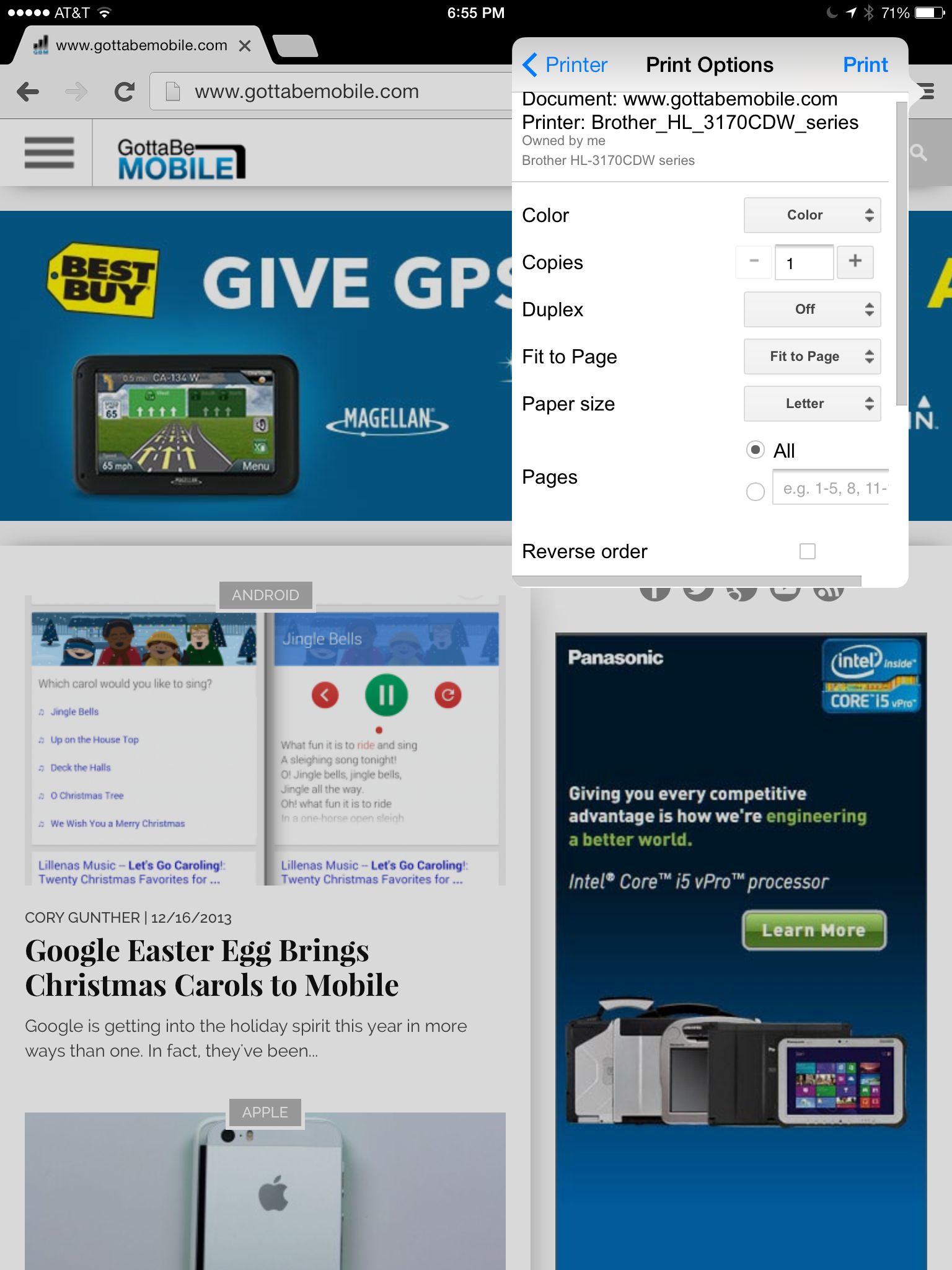 Printing from Other Apps

Users can print from any app that has Google Cloud Print in it, including Android or iOS app. Google includes this feature in the Google Drive app. Google listed some of the developers that include the feature on their site. 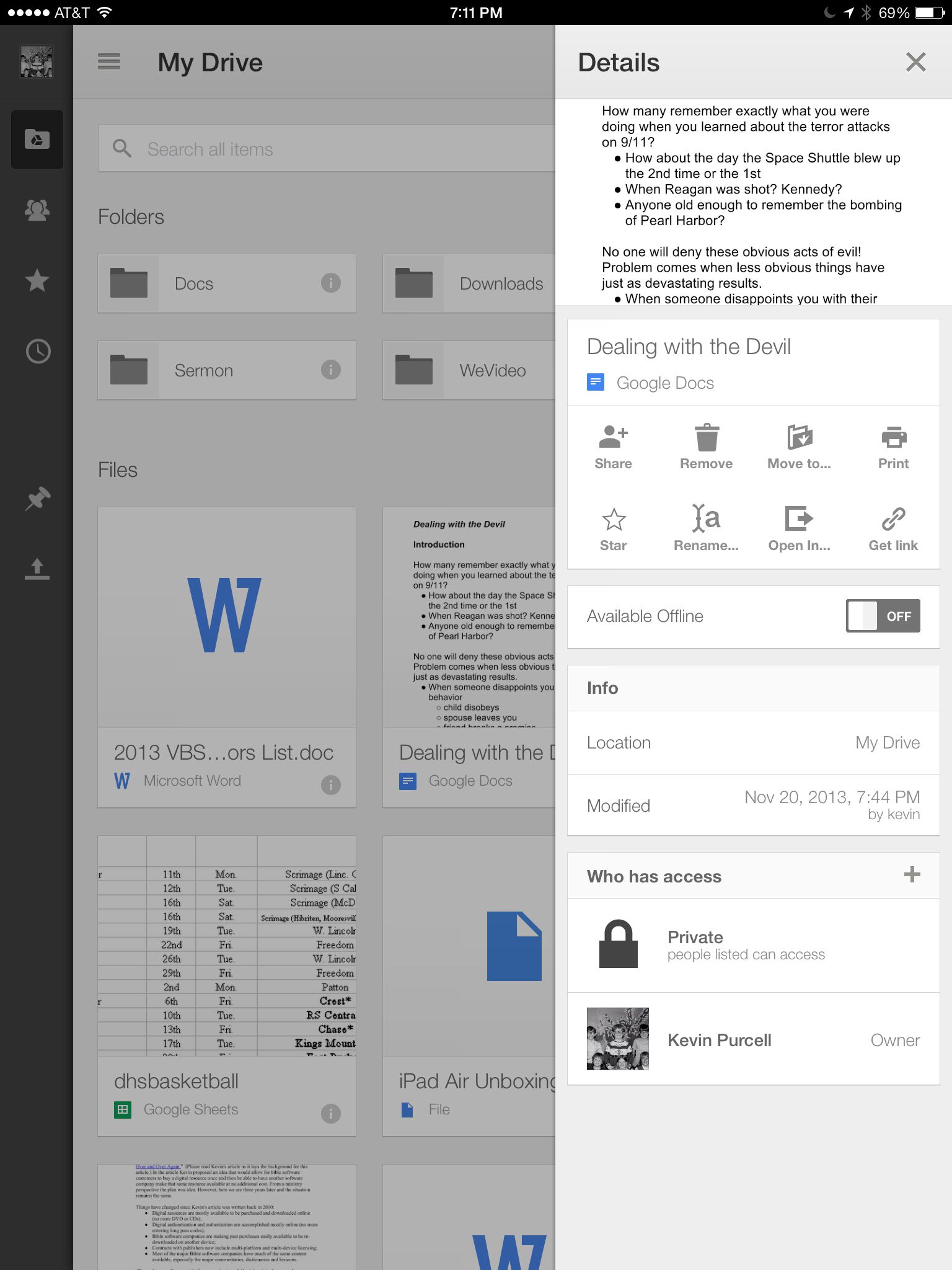 Open Google Drive and find a document to print. Tap the document’s information icon in the lower right corner of the document thumbnail (see these in the image above). A section flies out from the right side of the screen. Find the Print icon and tap it. The print dialog will appear. Tap Google Cloud Print and the list of printers set up already will show up. Select the printer and it will show the settings box again. Set things up as preferred and then tap Print.

For more detailed information about Google Cloud Print see Google’s help page covering Google Cloud Print. We hope that Google will add this feature to Android so that all apps can include it without need of developer support.