Having no cell service or reception while traveling is often an issue, and as a result users can’t look-up maps, get navigation directions and more, because they have no service. Today Google changed that, and has integrated a new feature allowing for the use of Google Maps and navigation while offline.

Read: How to Save Google Maps for Offline Use

Last year Google added a feature that allowed users to save portions of a map or area inside of Google Maps to view offline, which was nice, but that was only a map. Above is a guide on how to use it, but today it’s even better. Rather than only being able to save a map for offline use, users can now save an entire city, county, or trip around the world and save the map and navigation directions. Read on to learn how. 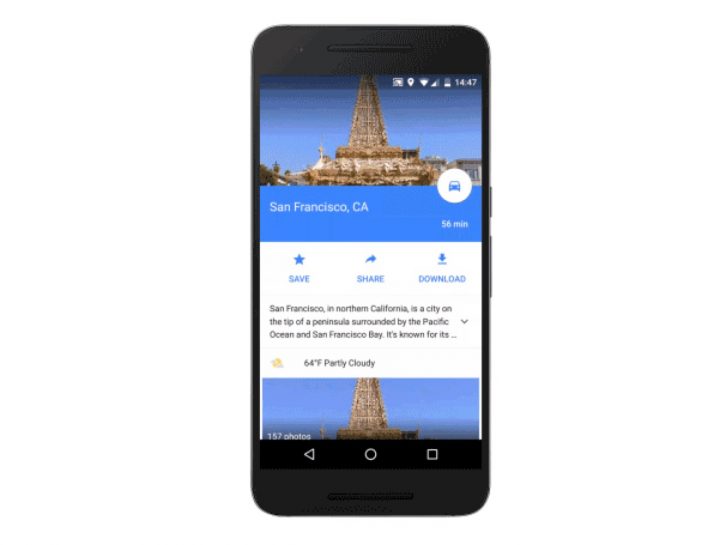 Google stated that nearly 60% of the world doesn’t have internet or cell service, and even areas that do have it are often spotty with areas that have no connection at all. As a result, users Google Maps won’t work, navigation fails, and accessing information while traveling or out and about is impossible. This new feature aims to change that.

With a new feature rolling out today behind the scenes (no app update required) users will be able to save a part of the world, a city and more, and use it without being connected to T-Mobile, Verizon, or anything else. Essentially allowing users to use the full power of Google Maps and Google Navigation without an internet connection. Google Navigation will continue to work seamlessly, offer turn-by-turn directions and more with no internet access. Here’s how to use it.

It’s actually very simple. Inside of the Google Maps app users simply can search for a county, city, or area, then download it. From here the entire area will temporarily be saved on your smartphone or tablet, and can be accessed in seconds. Allowing for instant navigation without a connection.

With Google Maps download an area by searching for a city, county or country, for instance, slide up, and tap “Download” on the resulting place sheet, or by going to “Offline Areas” in the Google Maps menu and tapping on the “+” button. Once downloaded, Google Maps will move into offline mode automatically when it recognizes you’re in a location with spotty service or no connectivity at all. From here it works as it should, even without a connection. Here’s it in action.

That’s it. Simply hit the slide-out menu and select “Offline Areas” to find all downloaded locations, open one, and start navigation to any area a user needs. Users can still search for a nearby place or store, hit navigate, and get directions just as before.

This was first shown off earlier this year, and is now available on Android devices starting today (slowly rolling out) and will be available on iOS in the near future. Google states that this is just one of many new features regarding using Google Maps and other Google services while offline.

In the future, Google will be offering more offline services to help users find their way, get directions, and do more without an active internet or mobile connection. If you don’t have it, get the latest Google Maps from the Google Play Store today and give it at try.