One of the craziest few weeks in all of sports is finally here. Of course we’re talking about March Madness. And just because you’ve cut the cord and don’t have cable, or are simply out and about or working, doesn’t mean you have to miss any of the action. If you want to watch March Madness live on Android, here’s a few ways to do so.

There’s plenty of options when it comes to watching live sports on our mobile devices, but many of them cost users money in the long run. If you want to catch all 67 buzzer beaters, biggest rivalries, and multiple upsets right from your Android smartphone or tablet, you can do exactly that.

Most likely you’ll be watching from your Android smartphone or tablet, if you’re not in front of your own TV. Sadly like me, you’ll watch your bracket go to shambles as all the upsets pile up. That said, below we’ll explain a few ways you can catch every single game live on Android. 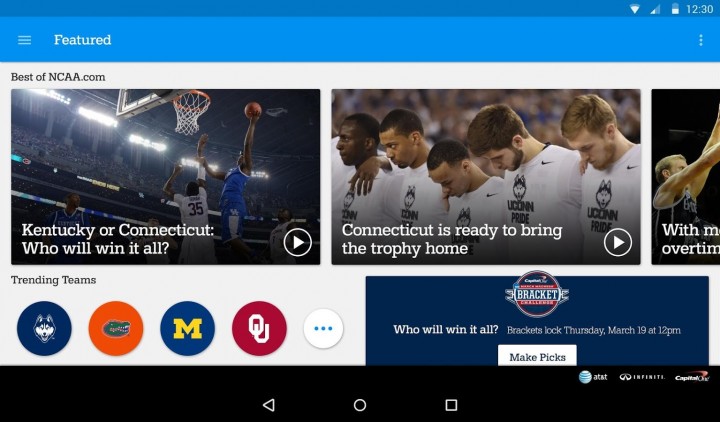 While there are a variety of ways users generally watch live TV and sports on mobile devices, the NCAA makes this very easy. March Madness is one of the best few weeks and most competitive games in all of sports, and they make it extremely easy for every fan to enjoy all the games. But not without a few caveats.

Updated for 2015 is the official NCAA March Madness Live Android app. And to be honest, that’s just about all you need. As long as you’re a cable subscriber paying one of the multiple supported providers, you can download the app, sign in, and enjoy all the games on the go for free. 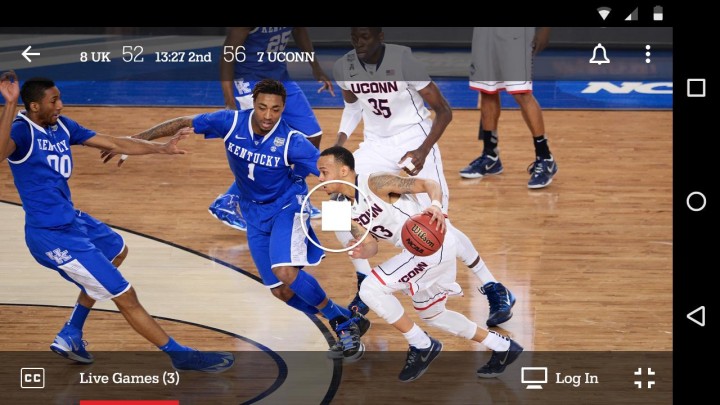 Every NCAA college basketball game being aired on TBS, CBS, TNT and truTV can all be enjoyed live from your Android smartphone or tablet. There’s a small preview period for all users, then you’ll need to login with your TV providers information. Then like last year, all CBS games will be live-streaming without a need to sign in, so essentially 100% free.

Once setup you can enjoy an interactive tournament bracket, one which will ultimate fall apart, minute by minute updates and stats, tons of alerts for when any game starts, overtime, upsets, or even just close games, and surely there will be tons of close games this year. There’s also an unbelievable real-time moment tracker on the bottom of live feeds that highlights key moments, big plays, slam dunks, or popular photos and tweets. Which was my favorite feature last year. The NCAA is doing it right. Take notice NFL.

The NCAA provides an interactive TV guide, game recaps if you don’t have time to watch everything, and even a Channel finder for games in your area and more. It’s really the only thing you need, as long as you’re a cable TV subscriber in some fashion. That’s the only drawback. That said, the final four and the big championship game are on CBS, so you can watch those live and for free with the app, even without a cable subscriber sign in.

There’s also a variety of other apps full of details, scores, alerts, and video. Users can get the CBS Sports App for Android, and if you have Sling TV there’s plenty of coverage on ESPN and the Sports package for a $5 add-on. Sling works on most devices.

If you have the Amazon Fire TV or Fire Stick, you can download and use the NCAA March Madness Live app in your living room, and catch all the games on the big screen. Download the official app, Watch ESPN, or a few other 3rd party methods.

Users can also simply head to NCAA.com/March-Madness to catch every game right from a browser. Whether that be on your PC, laptop, or the browser on your Android smartphone or tablet.

In 2013 the NCAA March Madness Live app cost $3.99 for live streaming games, but this year once you confirm your cable provider all games are free. This is the best option, but again for those without a provider, you can catch CBS games free with the Android app.

Of course the Slingbox and Slingplayer is an excellent option for those who’ve already paid for and enjoy it. Which is a device that connects to the users TV service at home, work, or anywhere with an internet connection and then streams it over Slingbox servers. The mobile app is $15, but if you already have this setup, you’ll be able to stream all the NCAA games with ease to any mobile device or browser. Just tune into any of the channels with a game you’d like to enjoy, and stream it to your device of choice.

We can’t forget that there’s always those “other methods” of apps and websites full of pop-ups, ads, and junk that can be harmful. While we don’t recommend these, or will link to them, there’s a few popular ones like Justin.TV or USTREAM. Not to mention plenty of apps on the Google Play Store, Like Aereo, but again, use caution.

The official NCAA March Madness app is available on Android, iTunes, Windows, and even the Kindle App Store, so all platforms can tune in and enjoy more than 67 games and over 150 hours of quality games.