If you’re a big college basketball fan like me you’ll want to follow the NCAA Tournament on the go. Since they play the early round games during the day on Thursday and Friday of the first week and the second week, I can’t always watch them on the TV.

If you have an iPad, iPhone, iPod Touch or one of the supported Android phones, then you can enjoy the games for only $3.99 using the NCAA March Madness Live app. If you’d prefer not to pay, you can still follow the scores and highlights as well as get notifications about things like upsets, final scores, etc. on your mobile device with one of the following apps.

A universal app for iOS and on Android in Google Play Store – Free with $3.99 in-app purchase for video 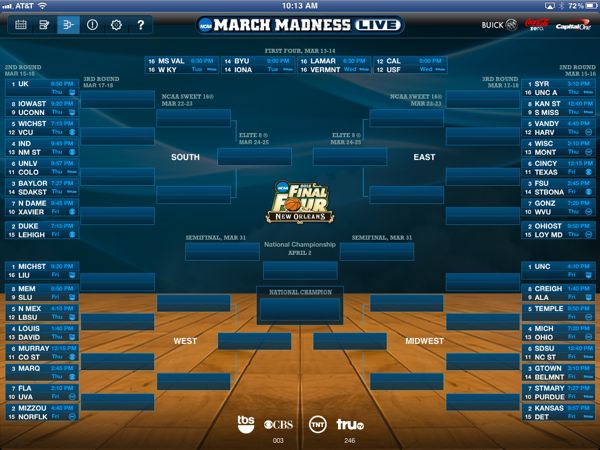 You can watch games using the NCAA March Madness App

The app has six sections represented by tiny icons in the upper left corner of the screen. The first, represented by a calendar, shows all the game times. Tap one of the games as they are playing live and you get the video, if you pay the $3.99 in-app fee.

A second section lets you fill out your brackets and enter the online contest the app makers host. Submit as many brackets as you like. You have to sign up for an account to participate. 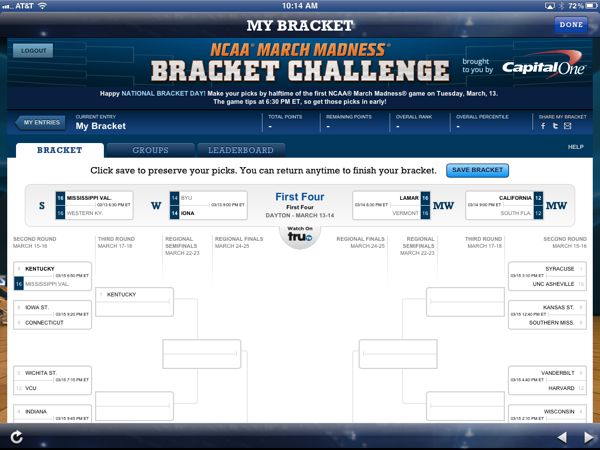 To see the brackets tap the third icon. It shows the full brackets with scores after each game finishes. 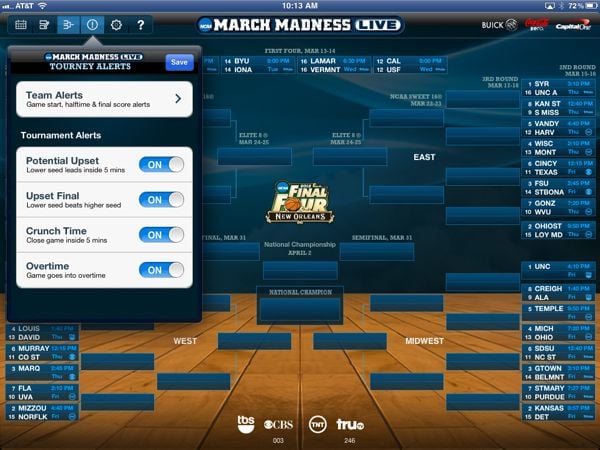 Setup the alerts you wish to receive in notifications

The fourth section lets you configure the app to alert you when one of the following occurs:

You can also set up team alerts in this fourth section.

The last two icons represent settings and help. Set your local TV provider so you can watch the video from your local CBS channel. You also log into your Twitter and Facebook accounts here so you can Tweet or post about a game while watching it.

The app looks great and has almost everything you would want to watch and track the games, set up your own brackets and talk trash via social networks. It doesn’t provide any expert analysis, so you may want to use one of the apps below. 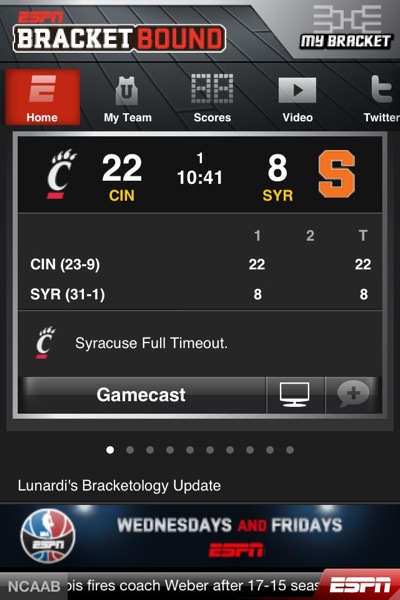 You can follow your team and all the action through this iPhone/iPod Touch or Android phone game. It shows news and highlights of games on the Home screen in a slide show interface. Tap a slide to get more information about the game.

When you tap the slides how you see the preview of the game before it starts. During the game you see the shot charts and stats with scoring info down to the moment a bucket went in. The app also lists team stats. 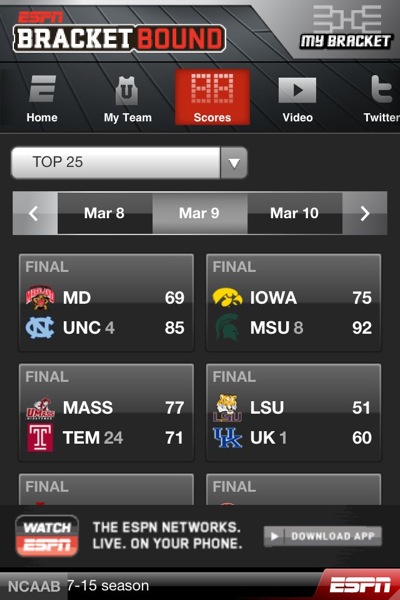 After the game you get all the info with a game recap and final stats. Each game will show video highlights and let you do some cyber bragging via social media.

The bracketology section lets you fill out your brackets and submit them to ESPN’s online contest. You get some good analysis and expert advice in the app to help you. Setup a pool with friends, family or your workplace. The app alerts you during the tournament to news, injuries, game updates and more. 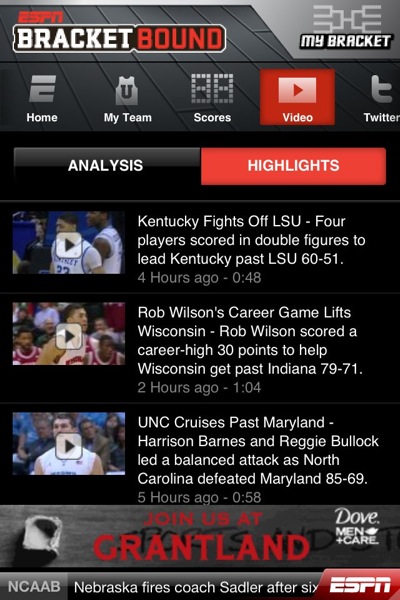 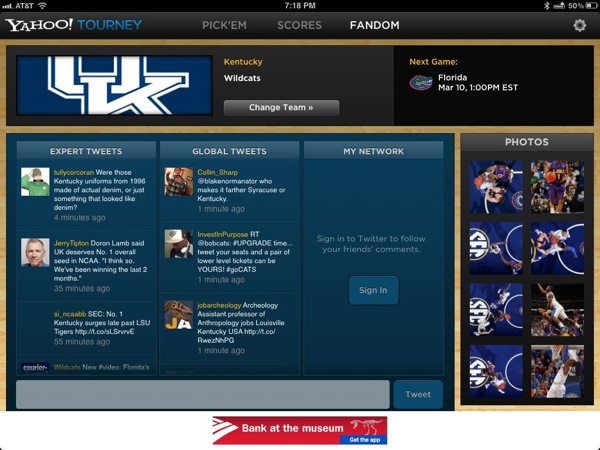 You can track your brackets submitted to the Yahoo online contents. The app lets you sign up and make your picks, view how you’re doing in your pool, and follow the games while they’re happening. Sign in with your Yahoo ID and create your first bracket.

The app’s three sections show you the brackets, scores and info about your favorite teams, if you set them within the app. 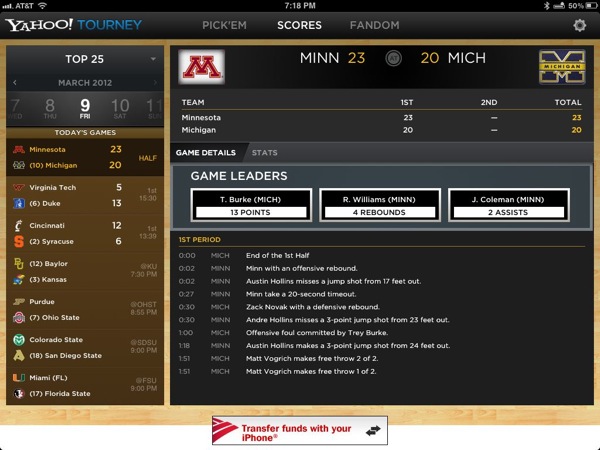 Create a group to play against friends or family. You can’t do that in the app, but once you do it online, you can join a group in the app.

The Scores section does what it says – shows scores of the games. Follow each game with stats and highlights before, during and after the games. 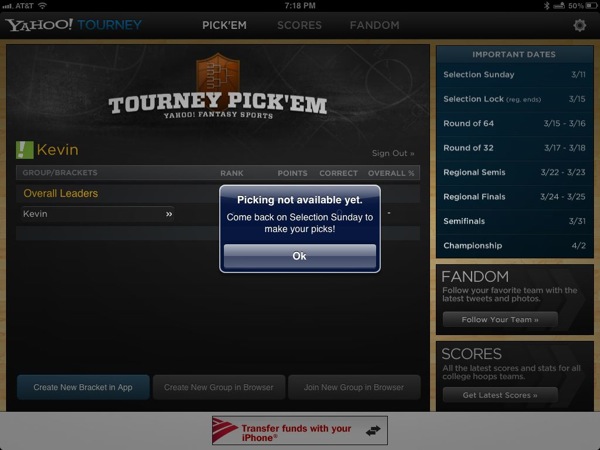 Set your favorite teams in the Fandom section and follow specialized information about them. It only lets you pick one team, a glaring weakness in the app for those of us who follow more than one.

One last note. If you have a SlingBox, don’t forget that you can always watch games using your SlingPlayer app.