The NFL doesn’t seem to want us to watch NFL football unless we subscribe to a couple of services, including Verizon Wireless and DirecTV for television, but we’re going to show readers how they can get around this and how to use the approved outlets on their iPhone, iPad or Android devices.

For customers of DirecTV, watching the NFL is as simple as downloading and installing the NFL Sunday Ticket app on their device. They offer a version for Android phone, tablet, iPad and iPhone. To make sure a device works with the app, see their compatibility list. Only a limited number of Android devices work. This list doesn’t include the Nexus 7, for example. 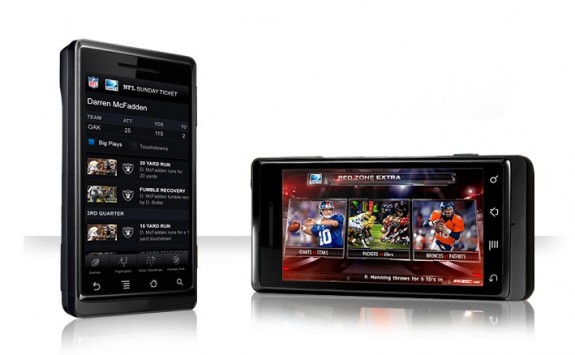 Get the NFL Sunday ticket app for Android, iPhone or iPad.

With the app, fans can watch games of their local teams so long as the NFL blackout rules don’t apply.

This costs a huge chunk of cash. DirecTV charges customers $59.99/month for five months for the privilege of streaming the games via the app. Make sure to subscribe to NFL Sunday Ticket MAX, $15 more per month than the basic Sunday Ticket subscription. People who don’t already subscribe to DirecTV can add the Sunday Ticket free just for this season if they sign up for DirecTV. 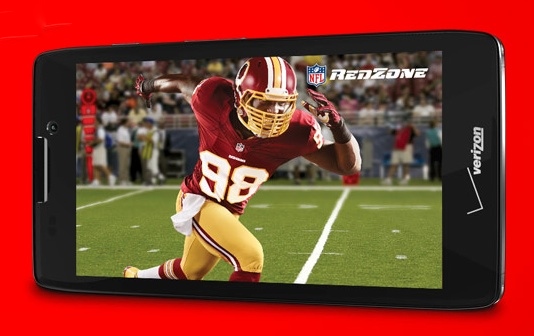 Get the NFL Mobile App for Verizon to watch live games on Thur, Sun and Mon nights for $5/month.

Customers of Verizon Wireless with a compatible smart phone can watch Thursday night, Sunday night and Monday night live games over the phone with the NFL Mobile app on Android, iOS, Windows Phone and Tablets and Blackberry. They can also watch the NFL Red Zone, which shows all the scoring plays of every game on Sunday afternoons. This doesn’t get them full live games on Sunday afternoons like the Sunday Ticket does, but it’s better than nothing.

Use the Slingbox 350 or Slingbox 500 to stream the NFL games to the Slingplayer apps.

We’re surprised no one else tried to compete with Slingbox to bring streaming content from a home TV to the web and mobile devices. We’ve seen a few services that give users some of what Slingbox delivers, but nothing close to all the features they offer and none that will let them watch live sports.

Get a Slingbox for the home or office TV set. Hook it up to the cable box, satellite box or an antenna. Then install a Sling Player app on a tablet or phone. Once the user configures the device and enters credentials, the box is ready to stream live TV from the home setup to the app or a computer browser.

The Slingbox 500 costs $300 and the Slingox 350 costs $180. Get them at Slingbox or other retailers. The 500 adds HDMI, Wi-Fi and an on-screen setup. It also streams personal content to other TVs or the app when the user hooks up a storage device to the USB port.

The Slingplayer app doesn’t come cheap either. It runs on most Android tablets and smart phones. Get it on the Google Play store for the phone or tablet. An Amazon Kindle version is also available. There’s also an app for the iPhone and iPad. They charge $15 each.

EA Sports scored a deal with the NFL letting buyers who purchased their expensive Madden NFL 25 Anniversary Edition video game from Amazon watch streaming games. They don’t have any left, but we mention it because some might own this game and purchased it from Amazon without realizing they’ve got a code that gives them access to the games on their computer, tablet or mobile devices.

Here’s one trick we’ve not tried, but some say it works. Computers with TV Capture cards can watch the NFL games from their local channels on their computer thanks to the tuner card. It puts a TV tuner in a PC or Mac. We’ve used cards from Hauppauge and liked them.

Now install something like Parallels Access, or another remote login or remote control app, on the computer and the tablet. The app connects to the computer over the Internet and shows the user their computer’s display as if they were sitting there looking at it.

Fire up the TV Tuner software and dial in the channel of the games and watch them over the Internet on a tablet.

Fans outside the US and a few other countries can watch NFL games on the NFL Game Pass app for Android and iOS. For all games the viewer pays over two hundred Euros. For one team’s games it costs 135 euros.