While we still have no idea if the NFL is going to have a season, the NFL Draft will still take place and Verizon has confirmed partnered with the NFL to bring exclusive live coverage of the Draft to Android devices. 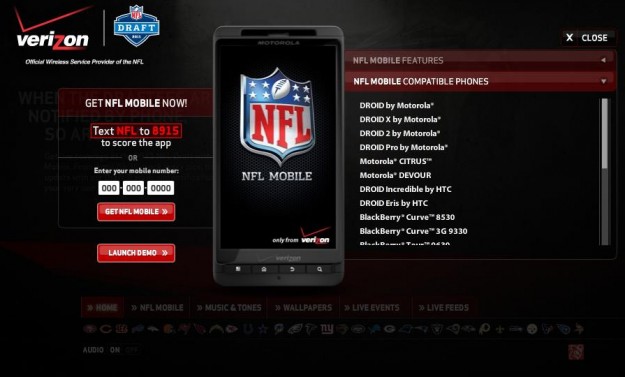 If you don’t already have it, the Draft is going to be covered on Verizon’s extremely popular NFL application which will include a ticker for timely updates on who drafted who, commentary from NFL analysts as well as video highlights of some of the draftees.

There are several ways to get Verizon’s NFL application. You can head to the Android Market and download it there or you can text ‘NFL’ to 8915 and you’ll get a link to where to snag it. Unfortunately, those of you on a Verizon iPhone 4 are going to be left out for now.

The NFL app and thus the Draft coverage is only available on Android devices and BlackBerry phones and you can find out if your device is compatible by heading here.

For those of you that aren’t aware, the 2011 NFL Draft takes place on April 30th in New York City at the Radio City Music Hall.