While the Hall of Fame game was the first action on Thursday Night, the first game streaming to Amazon Prime is September 28th, where the Packers take on the Chicago Bears.

Amazon will stream 11 Thursday Night Football games along with a mix of NFL Network, CBS, and NBC. The entire schedule is rather confusing as to what channel gets each game. Below is how and where to watch each TNF game. It’s an unprecedented move, and we have all the details.

How to Watch Thursday Night Football on Amazon Prime

The first few weeks of the season aired on the NFL Network. However, starting with Week 4, Amazon Prime video subscribers can tune in and enjoy games just about anywhere and everywhere.

First Thursday Night Football game available to Amazon Prime members will be Bears at Packers on 9/28.

Users will be able to tune-in on a computer, smartphones, tablets, Xbox One, Apple TV, Amazon Fire TV and more. Any device with the Amazon Prime Video app or service. More info is available here, as well as a sign-up page for more details.

Where to Watch Thursday Night Football

The entire schedule for TNF is a bit convoluted and difficult to remember, but the image below should help you keep track. Every Thursday game after Week 3 (except 9 and 12) will air on Amazon Video, and here’s how the rest breakdown. 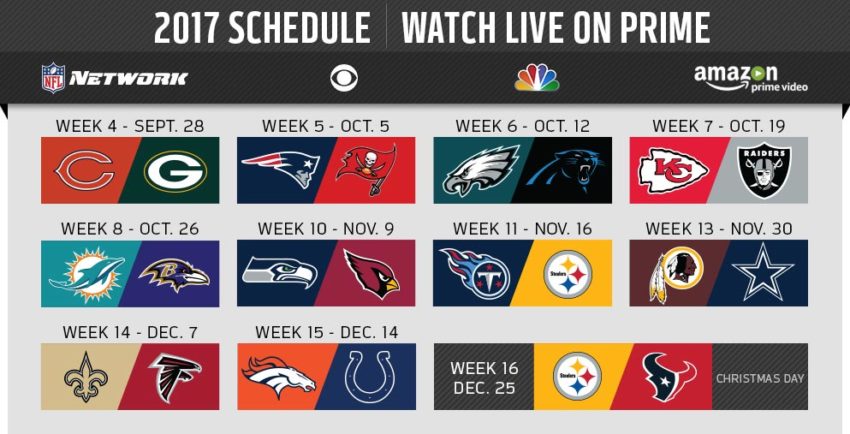 Basically, you’ll get to enjoy almost every game no matter where you are. Whether that’s on cable TV or streaming with Amazon Prime Video.

How to Stream TNF To Your TV

Most users won’t want to watch the entire game on their smartphone or tablet, and you won’t have to. Simply download the Amazon Prime Video app to one of the many supported devices, and stream it to your HDTV. Most devices like the Apple TV, Fire TV, NVIDIA Shield all have the app. Otherwise, get a Google Chromecast and “cast” the game from your phone to the TV inside the app.

Users can also stream it from a computer to their HDTV over HDMI. Additionally, you can stream CBS and NBC apps, or watch it from a browser on a computer. Verizon Wireless customers also get access to the NFL Mobile app, which streams multiple games throughout the year.

Do I Need an Amazon Prime Subscription?

Yes and no. If you’d like to watch Thursday Night Football anywhere and everywhere, on almost any device, you’ll need to pay for Amazon Prime. You can even try the trial first to see if it’s right for you.

If you want to watch almost every TNF game this season, you’ll need Amazon Prime which costs $99 per year. That subscription has a slew of benefits, like free 2-day shipping on the millions of products Amazon offers.

However, Amazon Prime isn’t 100% required, as select games are available from NFL Network, CBS, and NBC. Keep that in mind before you run out and pay $99 for Amazon Prime.

Other Ways to Watch Live

Of course, those aren’t the only way to watch NFL or Thursday Night Football live, especially on mobile devices. There are countless apps from CBS, NFL, NBC, Fox Sports, cable providers, Sling TV and more at our disposal. Find out how to watch games live with this guide.

While it seems odd to stream games on Amazon Prime, it has a few benefits. It’s one more way for fans to catch games anywhere and everywhere and makes it easy to stream Thursday Night Football. Additionally, Amazon Prime is available worldwide. Also, if you play Madden Ultimate Team and link your Amazon Prime and Twitch account, you get Twitch Prime for free. Then each week you can claim Madden Legends.

In closing, we expect Amazon to make a big deal about this partnership throughout the year. Look for further announcements, more ways to watch, and other Amazon NFL tie-ins in the near future.