After having recently introduced a more budget oriented Slate 7 Android tablet, it looks like PC-maker HP will try its hand at the more premium segment with a high-end SlateBook 10 X2 tablet. According to benchmarks that were captured from AnTuTu and reported by German site TabTech, the SlateBook 10 X2 will have a 10-inch display, quad-core NVIDIA Tegra 4 processor, and the latest Android 4.2.2 Jelly Bean operating system at its core.

There isn’t much other information about the tablet at this time, nor do we know about the materials and constructions of the slate. Pricing and release information are not yet rumored or disclosed. HP’s slate 7, on the other hand, was a basic entry-level tablet that costs just $170. 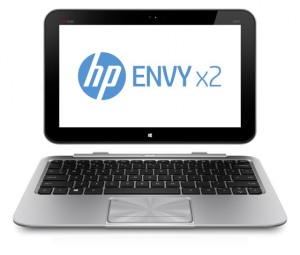 The SlateBook 10 X2 borrows the ‘X2′ moniker from the Windows 8-based Intel Atom-powered HP Envy X2 tablet, which has a very premium metal frame thanks to its Envy lineage as well as a convertible hybrid docking form factor where the tablet’s display can be docked with a keyboard to convert the slate into a clamshell notebook form factor.

It’s unclear if the SlateBook 10 X2 will employ a similar hybrid form factor that was popularized by Asus’ Transformer Pad series and is being used on a number of Windows 8 tablets. Given the ‘Book’ portion of its name, it may suggest that the SlateBook 10 X2 may use a similar docking design that offers users more versatility.

Additionally, to differentiate its tablet from rivals, the SlateBook 10 X2 may very well have Beats Audio technology given HP’s relationship to the audio firm. Beats was featured even on the entry-level Slate 7.