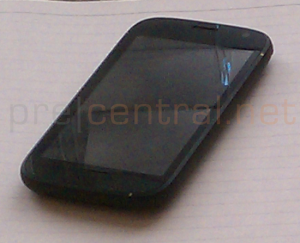 The device reveals what appears to be a device of similar size to the Palm Pre 3 without the sliding keyboard. The display is said to sport a WVGA 480 X 800 resolution and PreCentral is speculating that the codename for the smartphone is Stingray.

Ultimately, the black, button-less design resembles an EVO 4G running webOS. In the past, Palm’s webOS smartphone lines have carried keyboards to differentiate the devices from Apple’s iPhone. The Palm Pre (Pre, Pre 2, and Pre 3) utilized a portrait-oriented sliding mechanism while the Palm Pixi line used a portrait-oriented display over a narrower, but raised keyboard similar to BlackBerry and the Motorola Droid Pro.