It looks like benchmarking tool GLBenchmark has outed the presence of an HTC device with some advanced features that will be headed to Verizon Wireless’ 4G LTE network. At this time, however, it’s unclear if this device will be a phone, a phablet, or a tablet, though we do know that the device will have a full HD display with 1080p resolution along with a dual-core Qualcomm Snapdragon S4 processor that will come with beefier specs than what is available on phones on the market today according to a published post on Phandroid. This S4 Pro chipset will come equipped with a more powerful Adreno 320 graphics core and will deliver greatly improved performance according to GLBenchmark. 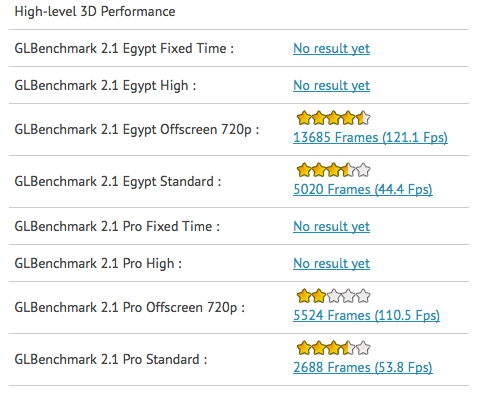 Little else is known about this smartphone, but it will definitely pose some serious threat to current HTC U.S. flagships, such as the HTC One X on AT&T and the HTC EVO 4G LTE on Sprint if this device will in fact be a phone.

In the past, we’ve heard rumblings that HTC is also interested and exploring the phablet market. The company, like rival Samsung, already has its HTC Scribe Magic Pen so a phablet is not out of the question. In the phablet space, Samsung is expected to debut a successor to its Galaxy Note this fall.

According to the GLBenchmark, when considering the Egypt off-screen 720p test, the performance of the new S4 Pro CPU on the rumored HTC device outclasses the quad-core Tegra 3-powered Asus Transformer Pad Infinity with a 1080p HD display.

After the launch of the HTC One series earlier this year in Mobile World Congress, it looks like HTC is using the momentum it has generated to try and advance its position in the Android market. We’ve heard that HTC will be releasing a tablet soon to follow up the launch of the HTC Flyer and the HTC Jetstream slates, and that tablet is being rumored as the HTC Vertex HD. We’ve also heard recently of a speculated new quad-core One series smartphone for AT&T’s lineup in the U.S. that will come with 4G LTE compatibility.