While Sprint may be the exclusive carrier to offer the HTC EVO 3D, further capitalizing on its relationship with HTC and its EVO franchise, the device may be sold internationally under the name of HTC Rider. Unlike other HTC phones for other carriers, the leaked blurry image of the 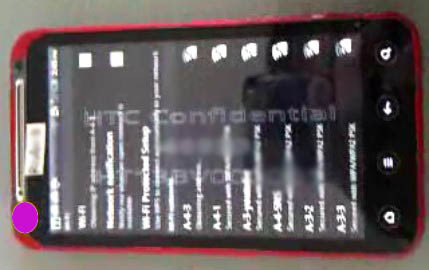 HTC Rider shows its distinct relationship to the Sprint’s EVO lineup, if true, as the device sports the same round and circular capacitive touch Android navigation buttons on the bottom. HTC devices on other carriers do not have the bubbly buttons, but rather stick to a more subtle home icon, the spelled out word for menu, a back arrow, and a magnifying glass for search; on the Sprint edition, you’ll see those buttons encased in a round circle, which is what we’re seeing here on the alleged leaked image for the HTC Rider.

Another similar device to the HTC EVO 3D is the HTC Sensation, which has similar hardware specs except the device will not have rear dual-5-megapixel cameras for 3D image and video capture. Both the EVO 3D and the HTC Sensation are expected to launch with dual-core processors from Qualcomm, a high resolution qHD 4.3-inch display, and front-facing camera. The Sensation will be coming to rival carrier T-Mobile USA.