Last night, a document leaked out stating that Sprint would be rolling out the HTC EVO 4G LTE Android 4.1 Jelly Bean update today. And while the update has yet to surface, there is now more evidence suggesting that today is going to be the day the software likely rolls out.

Yesterday’s leak of a screenshot of an internal document pointed to today as being the day that the HTC EVO 4G LTE Jelly Bean update would finally roll out to users of Sprint’s 4G LTE smartphone. The update still hasn’t rolled out but another leak and a listing on Sprint’s very own website suggest that the update will very likely come to the surface at some point today. 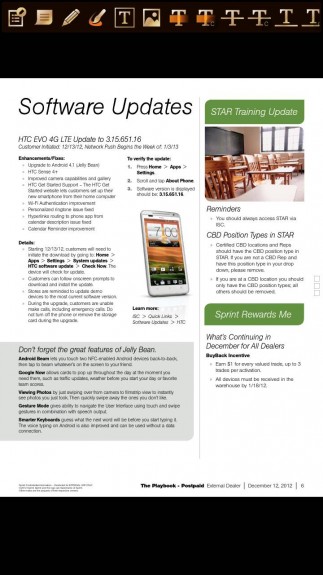 Android Central has acquired the actual internal document that was seen in the screenshot last night and which appears to be very real. The document clearly states that the update will be rolling out today, December 13th and that owners will want to check and see if it’s available through the EVO 4G LTE’s settings.

What’s more is that Sprint’s HTC EVO 4G LTE listing on its website now lists the EVO 4G LTE as shipping out with Android 4.1 Jelly Bean. The listing is small, but it’s definitely there. It could definitely be a mistake but the timing of the listing is a little telling given the date listed on the internal documents. So while the update is still not out, there appears to be a real good chance of it rolling out today.

Keep in mind, there is no definitive time listed on the document so Sprint has many hours to go before December 13th comes to an end. Android roll outs can certainly happen at any point in time so at this point EVO 4G LTE owners hoping to get Android 4.1 Jelly Bean should not give up hope.

Android 4.1 Jelly Bean will replace Android 4.0 Ice Cream Sandwich when it does arrive and it will be a massive upgrade for EVO 4G LTE owners. It brings Google Now, a new smoother user interface, improved stock applications, better notifications and more.