While the HTC EVO 4G LTE has been arriving on the doorsteps of customers who pre-ordered, the EVO 4G LTE’s release date still remains unclear.

While perusing the aisles at Best Buy, we stumbled across an apology from Best Buy, placed where accessories for the HTC EVO 4G LTE were supposed to be hanging.

On the placard, the company apologizes to interested parties saying that the retailer thought the phone would be coming on May 18th but that the phone was delayed and that the company still doesn’t know when the device is going to be launching. 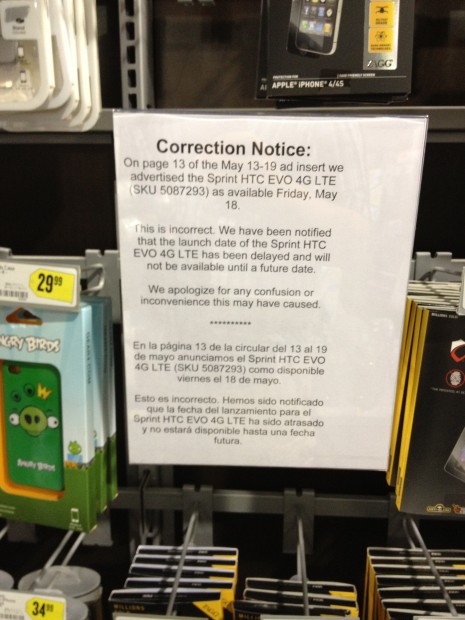 This of course comes just a few days after the HTC EVO 4G LTE began arriving on the doorsteps of those who placed pre-orders at both Sprint and Best Buy.

Orders began to arrive on May 24th.

However, neither company has shared any information as to when the device and its accessories are expected to hit shelves with the delay now entering its 12th day.

The HTC EVO 4G LTE was originally supposed to hit shelves on May 18th but due to a patent dispute with Apple, the device was held at the U.S. board by Customs.

However, it soon cleared the International Trade Commission paving the way for the pre-orders to start shipping.

So, hopefully, Sprint is able to share some official release date information soon and Best Buy is able to replace these placards with EVO 4G LTE accessories.

Has the delay steered you towards another phone? Or are you still waiting for the EVO 4G LTE?