Best Buy, which had originally pegged the HTC EVO 4G LTE release date as May 23rd, has now gone back on that and says it has no idea when Sprint’s smartphone will start shipping.

The evidence, provided by Android Central, shows that Best Buy has begun sending out emails to customers saying that it, like all of those who ordered the phone, has no idea when the release date actually is.

In the email, the retailer apologizes for the mix up and says that it will let customers know the release date of the phone when it does. 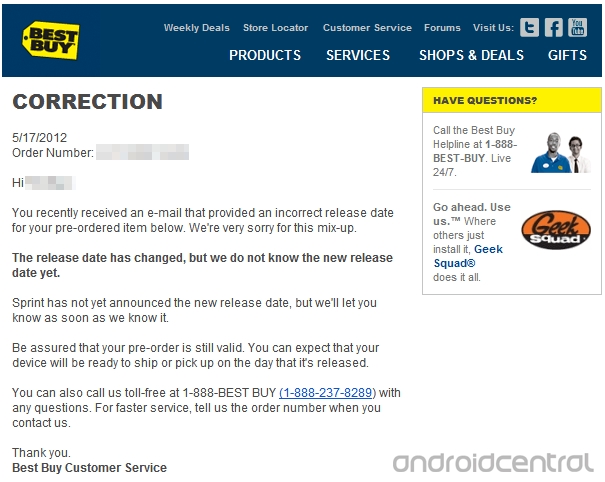 Yesterday, Best Buy started sending out emails to customers saying that the indefinitely delayed phone, which is currently sitting at U.S. customs because of a patent dispute HTC has with Apple, would start shipping out on May 23rd.

That date apparently is not going to be the day that those who placed pre-orders will see the device which means the release date of the EVO 4G LTE is still very much up in the air.

The HTC EVO 4G LTE was originally supposed to arrive on the doorsteps of pre-orderers today. However, the phone is currently being held by U.S. Customs because of Apple. So while HTC works to resolve the patent dispute with Apple, Sprint and those who ordered the phone have to wait to get their hands on it.

It has been a frustrating turn of events for consumers as Sprint has made canceling orders a nightmare. Those who have tried to cancel are being told that they cannot and that they have to refuse the delivery instead.

We’ll let you know when we hear something for sure.