On April 4th, HTC and Sprint will be announcing a new collaboration between the two companies. These are of course, the same two companies that launched the iconic HTC EVO 4G back in June of 2011 as well as its follow-up, the HTC EVO 3D, in June of 2011. Needless to say, anticipation is high among Android enthusiasts, Sprint customers, and those excited about Sprint’s upcoming 4G LTE network.

The device that Sprint supposedly will be announcing has taken on many names in the build up to its launch.

Its codename is HTC Jet but we suspect that it will be launching as the HTC EVO One, a name derived from HTC”s One Series branding.

And while some of the details surrounding the device are scarce, remember it hasn’t been announced yet, there are several rumors out there now about a phone that may very well end up overshadowing the launch of the Samsung Galaxy Nexus, Sprint’s first 4G LTE device.

Keep in mind, as of now, these are all rumors. We won’t have the concrete information until the device possibly gets official on April 4th.

Can HTC capture the magic of the original EVO?

Sprint’s HTC EVO One, if that is its real name, is supposedly similar to the HTC One X, a device that launched today internationally, and one that will be coming to AT&T at some point in the future.

The international version sports a Tegra 3 quad-core processor, but AT&T’s sports a dual-core S4 processor. That’s because the Tegra 3 hadn’t yet received certification for 4G LTE when the device went into production. Sprint’s device will likely suffer the same fate as it too is rumored to have the “Krait”, the codename for the S4, on board as well.

A full specification list leaked out a short time ago and here’s what we’re looking at:

Again, very similar to the HTC One X that will be hitting AT&T’s 4G LTE network.

There are a couple of other notable features as well.

It supposedly will come in both black and red variants and it will also feature a kickstand.

If you recall, the HTC EVO 4G featured a kickstand that came in handy when watching content. The EVO 3D did not feature a kickstand, something that bothered owners of the previous EVO.

Since we haven’t seen the EVO One yet, we can’t confirm a kickstand but we certainly have our fingers crossed.

While Sprint’s Galaxy Nexus will offer a vanilla version of Android 4.0 Ice Cream Sandwich, the HTC EVO One has been rumored to have HTC Sense 4.0 on top of Android.

In the past, this would be disappointing but we’ve spent some time with HTC Sense 4.0, and we feel like it might just be the best iteration of the UI to date.

You can check it out in the video below:

Regardless of your opinion of Sense, the HTC EVO One will almost certainly feature Android 4.0 Ice Cream Sandwich right out of the box, so there is no need to worry about Android 2.3 Gingerbread being the OS of choice. 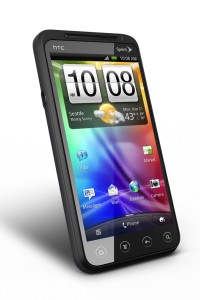 Sprint has said that it will no longer be releasing 4G WiMax phones. WiMax was the network that supported both earlier EVOs. This means that the EVO One will assuredly be a 4G LTE smartphone.

4G LTE means that the phone will be able to pull down data speeds that are 10 times faster than normal 3G. It’s also faster than WiMax.

So clearly, this is an upgrade over the EVO 4G , the EVO 3D and the rest of Sprint’s current 4G lineup.

Pair the hardware and software with an unlimited data plan and you have a phone that’s certainly worth considering as your next smartphone.

Thing is, Sprint’s 4G LTE network will take some time to roll out and that means that many of you won’t have those speeds available at the outset. So, many of you might get stuck with something else, likely CDMA 3G, until the network arrives.

As many of you know, the launch of a smartphone doesn’t necessarily mean the companies will give a concrete release date for the device. Translation: We may not see one arrive on April 4th.

However, we do have a rumored release date in June 6th.

June has been the launch month for the two previous EVOs and if we had to bet, we’d say that you June will be the month.

Sprint will want to space out the launch of the EVO One and the Galaxy Nexus, with the latter of the two expected to launch towards the end of April.

A June launch would accomplish this and give Sprint some time to roll out its 4G LTE network to more markets across the U.S.

We haven’t heard anything about the pricing of the device just yet but history tells us that Sprint will likely price it at $199 with a new two-year contract. Both of the earlier EVOs cost the same, with the EVO 4G being the first “4G” device, so we can’t help but think that the Now Network will stick to its guns and make this phone relatively affordable.

We should know when the pricing of the Galaxy Nexus gets announced.