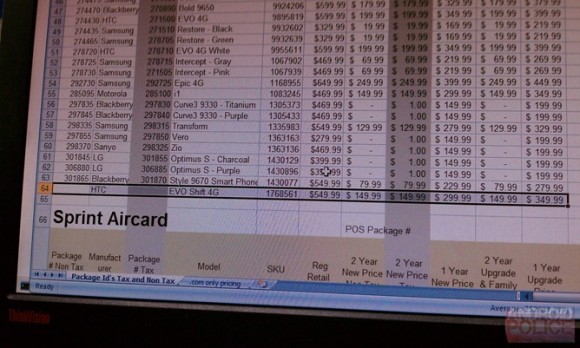 It looks like Android Police has just posted some screenshots of Best Buy’s computer inventory system, which reveals the Sprint HTC EVO Shift 4G Android smartphone for Sprint’s 3G CDMA and 4G WiMax network will be priced at $150 at launch with a two-year service agreement.

The HTC EVO Shift 4G will be a dual-mode 3G/4G phone for Sprint and will be HTC’s second 4G Android phone on the carrier. The company had launched the original HTC EVO 4G as one of the premier U.S. flagship Android phones with a capacious 4.3-inch display, kickstand, front-facing camera, and wireless hotspot mode. Unlike the original EVO 4G, the EVO Shift 4G will eschew the larger screen for a smaller display, but will add a landscape-oriented sliding keyboard. The HTC EVO Shift 4G will represent Sprint’s answer to rival T-Mobile’s HTC G2, which that carrier is also boasting as a 4G smartphone.

The HTC EVO Shift 4G is expected to launch with HTC’s proprietary HTC Sense user interface on top of Android.

When it launches, the device will also be competing against the Samsung Epic 4G, another 4G offering on Sprint’s network. Both devices offer sliding keyboards, but Samsung’s device is a Galaxy S variant with a 4-inch Super AMOLED display whereas the EVO Shift 4G will use an LCD panel.