It appears that Verizon might have a couple of 4G LTE world phones up its sleeve in the form of the oft-rumored LG Spectrum and the recently leaked HTC Fireball. Both screenshots here, which list the phones in Verizon’s system, show an ‘O’ underneath the Global Phone listing. And while this doesn’t necessarily guarantee that they will be world phone’s, there’s a chance. ‘O’ is better than an ‘N’ which would mean flat out no.

To date, Verizon has not released a global ready 4G LTE smartphone.

The LG Spectrum aka Revolution 2 is likely going to be a phone similar to AT&T’s LG Nitro HD. It’s also assumed to be the successor to the LG Revolution, LG’s first 4G LTE offering on Verizon.

Yeah, it’s not much of a secret. 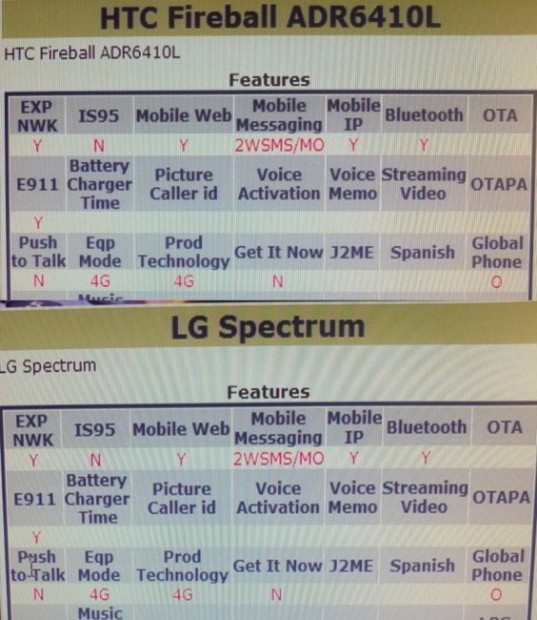 On the other hand, the HTC Fireball remains a complete and utter mystery.

It has been theorized that it’s some kind of 4G LTE-version of the HTC Merge – which would make it HTC’s answer to the Motorola Droid 4, but that’s just theory at this point.

Unfortunately, because the year is winding down, we’ll probably have to wait until 2012 to find out for sure.

It’s possible that Verizon could use CES as a launching point for both devices.