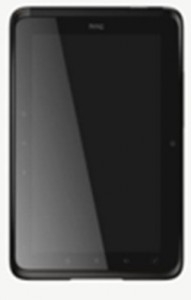 Specs for the rumored HTC-made Android tablet, also referred to as the HTC Flyer, has been leaked and reveals that the slate will utilize a 7-inch form factor and sport a Qualcomm processor.

The HTC Flyer will be powered by a Qualcomm Snapdragon MSM8255 processor, which will be a 1 GHz processor and will utilize the Adreno 205 graphics. The processor is similar to that found on the T-Mobile myTouch 4G and the HTC Desire HD.

The device’s 7-inch screen will have a resolution of 1024 X 600, which is similar to Samsung’s Galaxy Tab.

The Flyer will support an HDMI output port, DLNA for wireless streaming, 5-megapixel rear camera and 1.3-megapixel front camera. The front camera is said to support Skype video calls and the device is said to come pre-installed with Skype.

HTC is bundling a version of its HTC Sense user interface for the tablet to give it a more desktop feel. A prior report suggest that HTC Sense for tablet may be re-badged as HTC Sensation. The device was said to be shown with Android 2.3 Gingerbread, though it could potentially launch with Android 3.0 Honeycomb, which is still being finalized as the first version of Android that is tablet-ready, at launch.

There will be a 7-inch HSPA version, which could either land on AT&T or T-Mobile USA, and a 10-inch LTE version of the tablet. The 10-inch LTE model will come in the second half of the year and could suggest a debut on either AT&T’s network or Verizon’s 4G LTE network at that time.