Late last month at Mobile World Congress, smartphone-maker HTC had unified its Android smartphone offering under the HTC One moniker, with the high-end One X announced to be coming to AT&T in the U.S. and mid-range One S model destined for T-Mobile USA. Now, it appears that HTC may have another phone that slots just below the entry-level One V model, and that is in the form of the HTC Golf, a model that was revealed through the EXIF data on a sample photo obtained by blog pocketnow. 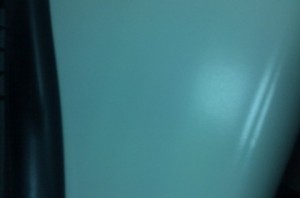 The photo sample reveals a three-mgapixel image that’s mostly dominated by a teal surface. Not much information information is known about the HTC Golf at this time, but being a more budget-friendly model, we can probably assume that the camera innovations behind the One X won’t be making it to this more affordable model. The blog did speculate that the HTC Golf will have a 3.5-inch HVGA display with 512 MB RAM and sub-gigahertz processor. The phone would run Android 4.0 Ice Cream Sandwich and the newly announced HTC Sense 4.0 user interface.

The device’s specs would place the HTC Golf just below the HTC One V, suggesting that the phone may come with an even more affordable price tag that the One V, which was announced at MWC.

It’s unclear when HTC would announce or release the Golf, and it would perhaps make a greg entry-level offering or a good phone selection for those on a pre-paid plan where carriers often won’t subsidize the cost of a phone. The Gold may replace the HTC Wildfire S series smartphone that is currently available.