HTC HD7 or myTouch 4G? Which one gets my sim card?

This past Friday, I headed out to T-Mobile to grab the HTC HD7 if they would sell me one. T-Mobile wouldn’t sell and I ended up playing with the myTouch 4G instead. I headed back to work and called around. I found a store willing to sell me an HD7 a few days early. I packed up and headed out to buy the HD7. I arrived at the store and decided to just pay full cash so I could get out the door before they changed their mind. Since Radio Shack was on my way back to the office, I wanted to check out that myTouch 4G again. I also needed a T-Mobile account since I have been an AT&T customer for more than 10 years. I ended up grabbing the myTouch 4G too and I signed up for T-mobile. I even ported my number over. I now own three of the hottest GSM devices on the market and I am not sure which one will win out as my daily driver. I have the HTC HD7, the myTouch 4G, and the iPhone 4G, but it’s down to two since I have already eliminated the iPhone 4 from the game. 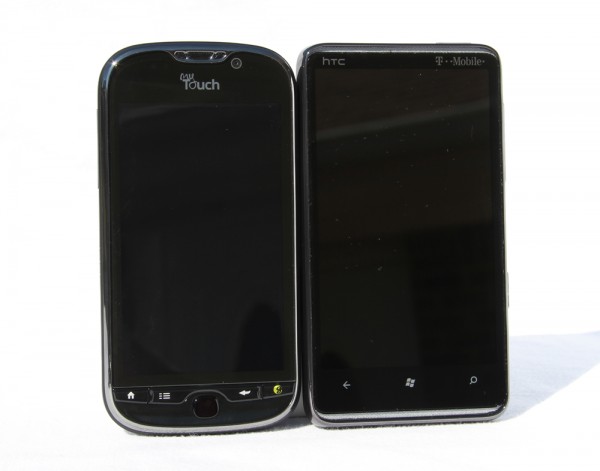 This choice comes down to two factors, hardware and software.

Both the HD7 and the myTouch 4G are made by HTC. They are both well built and sport speedy 1GHZ processors. Here my pros and cons on each of them, I am leaving software related issues for the next list.

I honestly found enough good in the hardware design for both devices that my choice can’t be made on hardware alone. I am a big guy, so the HD7 is just my size and the myTouch 4G is a little small for me, but it’s still quite usable. Battery life isn’t much of an issue for me since I can charge with my MacBook Pro and I am close enough to AC power most of the time that I can keep her topped off.

I used to laugh at people caring about cameras on a phone, but with social media and the ease of sharing candid, quick snap shots, I found myself taking more and more photos with my phone. Cameras now matter to me. The camera issue with the HTC HD7 is more than likely something easily correct with software. I know the same issue occurred with the HTC HD2 last year and software fixed it.

The storage issue is a big old issue in my book. With Zune intergration and  Zune Pass content available for the HD7, storage memory is important. With the HD7 not being able to have it’s memory increased without voiding warranty and reforming the device, my dream of merging Windows Mobile into Zune isn’t working out too great. I didn’t buy a Zune HD because I didn’t want to lose the capacity I have in my Zune 120. Knowing I only have 14gb to play with for media on the HD7, I started through my music selectively picking music I wanted to live on the phone. A few minutes later, I looked down and I was at 8GB of music already. I pulled out the tools and was ready to dissect the HD7 and throw a 32GB card in there but I chickened out. I decided to pop the card into the myTouch 4G instead.

My hardware choice is the myTouch 4G.

Here’s the tricky part. There are a lot of reasons I want to love Windows Phone 7. Trust me. This week, I planned to use the HTC HD7 running Windows Phone 7 for the entire week and wrap up a review. This new and definitely improved mobile OS Microsoft has brought to the table grew on me a little more each day. The last two days have proved a little trying though. I was enamored by the newness and was real busy taking it all in. I didn’t pay attention to the real world, day to day tasks that I need a phone to accomplish. That said, I will start off with Windows Phone 7 in my comparison of these two operating system.

And here are the negatives so far.

Android 2.2
This is a mature OS that has come a long way since the last device I used before I took 6 months off, the Samsung Moment. I admit that before I reviewed the Samsung Fascinate, I wasn’t too thrilled with Android. Now, I am liking it a lot more. 2-3 major updates and more familiarity can do wonders. I am starting to feel more platform agnostic now.

Here are some things I love about Android 2.2 (on my myTouch 4G).

There really isn’t much that I can say negative about Android 2.2, but here is that short list.

It’s really not a fair comparison since Android is a more mature OS at this point, but I have to give props to Microsoft, they did come out with V1 fighting.

Without a doubt, the myTouch 4G would be my choice if I actually had to choose between the two. I don’t have to choose though. I intend to use them both. I want to watch how Windows Phone 7 progresses and need to have a Windows Phone 7 device to be able to follow along with the progress. I am going to retire my Zune 120 and use the HD7 as my Zune, even though it has a little more than 10% of the total capacity my Zune has. I will be able to use the HD7 as a media player/internet browsing device along side the myTouch 4G through it’s Wi-Fi hotspot. Email, Facebook, Yammer, and Twitter notifications in my bar provide me all the info I need on the myTouch 4G at glance and I can punch out an email quicker with Swype than I could on the iPhone and definitely much faster than on the HD7.

I am going to use the myTouch 4G as my daily driver.

A couple of final notes:

This assessment of the HD7 and myTouch 4G is not my final answer. While the opinions will mostly likely not change, my final review of these two phone won’t be post until I give both of them more time. I have used the HD7 for 4 days and the myTouch 4G for only a day. That’s not quite enough time to give a fair assessment. Stay tuned!

The odd thing about this choice I am making, or didn’t really make is that my buddy Matt Miller is going through the same dilemma right now. Just yesterday, he posted a similar article with similar opinions. We spoke after his went live and I think we both have the same feelings in regards to Windows Phone and wanting stick with Microsoft to watch the OS grow. This is version 1 of this OS and look how far Android and iOS have come since their versions.