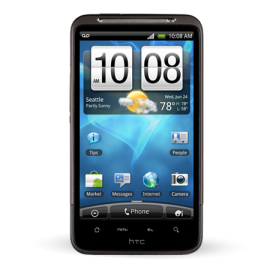 The HTC Inspire 4G is an Android smartphone with the HTC Sense user interface and a 4.3-inch display that debuted earlier this year at CES. AT&T has now just released availability on the 4G HSPA+ device, stating that it will be available beginning on February 13 for $99 on a two-year service agreement.

The device can be seen as a competitor to Sprint’s HTC EVO 4G, which offers a similar large screen display and the HTC Sense experience on top of Android. The EVO 4G, however, connects to Sprint’s 3G CDMA/EV-DO network and the carrier’s 4G WiMax network.

The HTC Inspire 4G has a 1 GHz processor, 8-megapixel camera and 720p HD video recording, and offers support for mobile hotspot tethering with an optional DataPro Tether Plan that would allow users to share their AT&T mobile broadband connection with other WiFi-capable devices. The carrier still has not revealed what it would charge for the DataPro Tether Plan. In the past, AT&T has offered tethering plans for the iPhone, and the DataPro plan could mirror the iPhone’s offerings.

Dolby Mobile and SRS Surround help to round out the multimedia and entertainment capabilities of the device.

AT&T says that it has completed HSPA+ deployment to 100 percent of its network, which will offer 4G speeds to devices. The carrier will be transitioning from HSPA+ to LTE as its 4G standard in the second half of this year. In addition to the Inspire 4G by HTC, AT&T had also announced the Motorola Atrix 4G and the Samsung Infuse 4G at the Consumer Electronics Show.