With the HTC M7 launch rumored for just a few weeks from now, more rumors and leaks are coming to the surface. More and more it’s looking like HTC is going to be calling the HTC M7 and a new rumor suggests that HTC will be putting a top notch camera on its new flagship device, a feature that may be one of its major selling points.

Last week, HTC CEO Peter Chou seemingly introduced the HTC M7 on stage early when he brought out a device that is thought to have been the upcoming flagship. Chou, who was said to have been hosting a party for the M7 team members, also enticed the crowd into chanting ‘M7’, the rumored name of the upcoming smartphone. 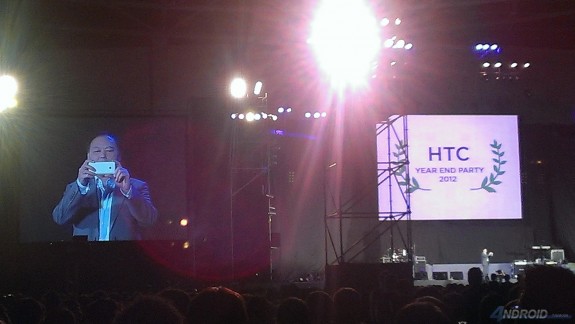 HTC CEO Peter Chou showed off what appeared to be the HTC M7 on stage.

Now, a pair of internal listings from Vodafone and Carphone Warehouse found by HTC Inside and Pocket-lint, which seem to all but confirm the HTC M7 retail name. The name was thought to be a codename for the device but now, it appears as though the device might actually be called HTC M7 when it’s announced and released.

In addition, Pocket-lint is claiming that the device will have an ‘Ultrapixel’ camera sensor. If true, it appears that HTC will be following up the fantastic camera of the HTC One X with another fantastic offering.

Evidently, the HTC M7 camera will be made up of “three 4.3-megapixel sensor layers.” They will work in conjunction to offer an extremely crisp and clear final image. The images apparently won’t be 13 megapixel images but they will be fantastic nonetheless, assuming of course that this is true.

This new camera will apparently be one of the biggest features of the HTC M7, which previously was thought to have a 13MP camera sensor. Three 4.3 megapixel sensors are extremely close to that so the confusion isn’t surprising.

HTC is currently rumored to be showcasing the HTC M7 on stage at two events on February 19th. One event will be taking place in London and the other in New York City. The company still hasn’t confirmed anything about the event, including the product being unveiled there but it’s becoming fairly clear that the HTC M7 will be the star of the show.

Besides the camera, the HTC M7 is rumored to have a 4.7-inch 1080p display, quad-core processor, Android Jelly Bean – likely Android 4.2 Jelly Bean, and support for AT&T, Sprint and T-Mobile.

Verizon’s HTC M7 is said to be a little off in the distance, though it’s unclear just how far off it might be from release.