The oft-rumored HTC M7, a device that is rumored to be the upcoming high-end flagship replacement for last year’s HTC One X, has emerged in a new possible image today, an image that depicts what could very well be the smartphone that HTC reveals next month at Mobile World Congress.

Thus far, we’ve seen two possible images of the HTC M7 leak out. One image leaked out during CES and displayed a phone that really didn’t jump out of the screen. It was nondescript and didn’t reveal much. Several days later, another image leaked out displaying a device that looked eerily similar to the back of the iPhone 5. Turns out, the first image may have been the correct one. 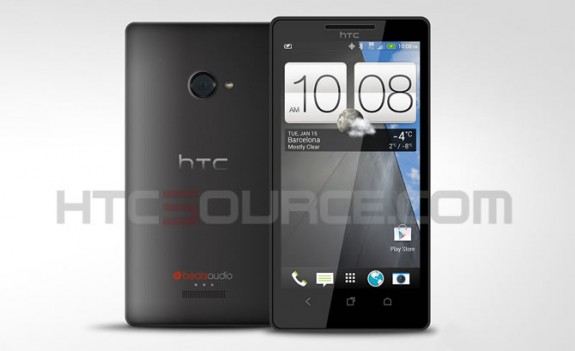 This could be the HTC M7.

Today, in a leak from HTCSource, we have an image of a phone that could very well be the HTC M7. The latest image is a clear cut press image of an HTC smartphone and even more, it shows off Barcelona in the UI, the city where next months Mobile World Congress will take place.

The render looks a lot like HTC’s Windows Phone 8X, its Windows Phone 8 device, and it seems to feature soft plastic material instead of an aluminum design like the HTC One X employed. This image also resembles the Windows Phone 8X quite a bit as well. We also see a glimpse of HTC Sense 5.0, something that has been rumored to be on board and a piece of software that has leaked out in images previously.

We also see Beats Audio listed as being on board and there also appear to be navigation buttons on the bottom of the device as well.

The source is also reliable which also gives this a good chance of being the HTC M7. All that considered, there is also a possibility that this is a well done fake so take it with a grain of salt. We will say that this looks a lot more probable than the image we saw leak out previously though, an image that looked like HTC’s version of the iPhone.

The HTC M7 is rumored to feature a 4.7-inch 1080p full HD display, a quad-core processor, Android 4.1 or Android 4.2 Jelly Bean, a 13MP camera, a launch date next month and a release coming as soon as March.