After a few months of rumors, this morning HTC officially announced another premium smartphone to potentially replace the HTC One M9, while taking on the Galaxy S6, iPhone 6s and more. This new phone is the 5-inch HTC One A9, and below are five things buyers need to know about it.

The new HTC One A9 builds on the small success of HTC’s premium all-aluminum smartphones with a sleek new and improved design, a built-in fingerprint scanner, an improved camera, and it will be the first non-Nexus device to launch with the latest Android 6.0 Marshmallow software. It has a lot to offer, while cutting back in a few areas, and comes in at a wallet-friendly price of just $399, for a limited time.

It’s no secret HTC has been struggling as of late, and their latest HTC One M9 looked nearly identical to last years model and hasn’t seen the success the company was expecting. As a result today they launched an all-new and well rounded smartphone with a more aggressive price, better features, multiple color options and will offer it on most carriers in the United States. For $399 the HTC One A9 has to compete with Google’s new Nexus 5X, the Moto X Pure Edition and more, so read on for a few key details about this new all aluminum smartphone.

No one expected another “flagship” smartphone from HTC this year, but after the failed launch of the HTC One M9, another was made. It’s called the HTC One A9 and it will be available starting in early November, as the first phone not made by Google to launch with Android 6.0 Marshmallow.

The HTC One A9 has some impressive new features, a sleek new design, comes in multiple colors, and has addressed a few major problems and concerns buyers had with the M9 earlier this year. And while the design stole a little from the iPhone in terms of the look, and Samsung with the new home button on the bottom front, this is a very capable smartphone that should be on all buyers radar if they don’t want to spend $600+ on a smartphone. Here’s what you need to know.

HTC One A9 Release Date

Today HTC confirmed its new One A9 smartphone will be released during the first few weeks of November, and that all major carriers in the United States will make formal announcements soon, confirming their own release dates, color options, and pricing. That said, the HTC One A9 went up for pre-order today at HTC.com starting at $399, which we’re hearing is a promotional price for a limited time.

This means that buyers can expect the full retail cost to be closer to $449, with carriers likely offering something in-between, contracts, or monthly payment options. HTC didn’t state exactly which carriers are on board, but we can expect Verizon, AT&T, and likely both T-Mobile and Sprint as well, but will update once we know more.

HTC will begin selling the phone in the first week of November, and carriers should make it available before the end of November as well. If purchased through HTC’s own website the phone will be fully unlocked, developer friendly, and works on all major carriers, just like the Moto X Pure Edition, or Google’s new Nexus smartphones.

HTC One A9 Specs

The new HTC One A9 isn’t the most powerful smartphone released in 2015, but it’s clear the company wanted to deliver an all around decent smartphone that wouldn’t cost an arm and a leg. As a result it has some top-end features, while a few small reservations to keep the price down. Here’s the hard numbers for those interested.

HTC One A9 Specs

As buyers can see above, the HTC One A9 has a pretty impressive spec sheet. The company went with a mid-range 8-core processor, rather than the high-end Snapdragon 810 found in the Nexus 6P or HTC One M9. It comes in two different configurations to meet the low $399 price point, and the 32GB of storage and 3GB of RAM option will likely be $449 or $499.

The camera and battery life has always been a problem for HTC, and this time around they appeared to have fixed one of those. The HTC One A9 has an improved 13 megapixel camera with optical image stabilization, lots of options, RAW support, a new Pro mode for advanced controls and more. However, sadly, this phone comes with a tiny 2,150 mAh battery, which is unacceptable these days where most phones are coming with 3,000 mAh at the minimum. With an exception going to the Galaxy S6, which still has a bigger 2,550 mAh battery and wireless charging.

That said, the phone does have a more efficient processor, a small 5-inch screen that’s only 1080p (not Quad-HD) and runs Android 6.0 Marshmallow, so battery life could be better than many expect, but still not stellar. That’s because 2,150 mAh can only get a smartphone so far.

HTC removed the dual front-facing speakers that has made many buyers love their phones, and placed a dedicated fingerprint scanner on bottom similar to the Galaxy S6. It’s the same size and shape as Samsung’s home button.

Using the native support for fingerprint scanners in Android 6.0 Marshmallow, users will be able to instantly unlock the HTC One A9 with the tap of a finger. Sign into apps or websites, pay for things on the Google Play Store, or even use Android Pay all with the built-in fingerprint scanner. This also offers improved security. 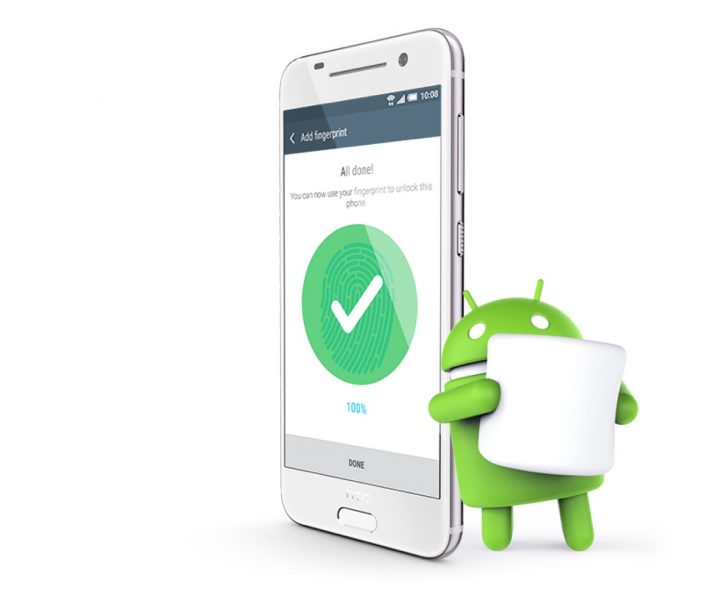 It’s clear that more and more phones will continue to launch with a fingerprint scanner, and the HTC One A9 will be the first one to market running Android 6.0 Marshmallow, aside from Google’s own Nexus 5X and Nexus 6P, which are available as we speak, and started shipping yesterday.

Google just released Android 6.0 Marshmallow, the replacement for Android 5.1 Lollipop, on October 5th. Most manufacturers have confirmed updates will start in December, or possibly longer, but not the HTC One A9.

HTC’s new smartphone will be the first phone released with Android 6.0 Marshmallow, aside from Google’s own Nexus 5X and Nexus 6P. This means it gets all the new features and improvements first. From fingerprint support, Doze for improved battery life, Google Now on Tap, permission controls and more.

Running Android 6.0 Marshmallow should offer much improved performance, especially with an 8-core processor inside. The phone comes with 2 or 3GB of RAM, which is plenty, and Marshmallow has a new feature called “Doze” which lets apps go into a deeper sleep state, which has shown to increase battery life by roughly 30% in some cases.

Meaning this phone has the latest software already, won’t have to wait months for an update, and should perform extremely well. It is worth mentioning that it will still be covered in HTC Sense UI, which some love, and others hate. That is a skin that covers stock Android, just like Samsung and LG offers with its smartphones.

One thing that any Android smartphone or tablet owner knows, is that updates aren’t always very quick. Today though, HTC made a bold claim with the new HTC One A9. According to the company, it’s new smartphone will receive software updates 15 days after Google releases them.

Meaning if Android 6.0.1 Marshmallow is released sometime in November or December to fix a few bugs, HTC will deliver updates within 15 days of Google doing the same. That is a big claim, and something that could get some major attention from potential buyers. Everyone wants the latest and greatest, and HTC is promising it with this new phone.

HTC is also talking a lot about “customization” with the HTC One A9, but we’re not sure why. While it does come in five beautiful colors as shown in the images above and below, which will vary by carrier, that’s about it as far as customization. HTC also has a “theme” app that allows for complete control over the entire look of the device, including a rather stock Android theme for those interested in replacing most of HTC Sense. 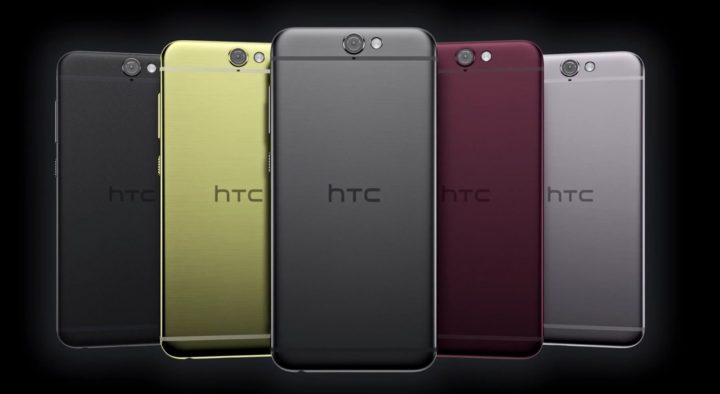 For the most part there isn’t anything else that can be customized here. The phone is made of glass and aluminum, comes in five colors, and has some fancy software options to give users a more personal experience.

All said and done the brand new HTC One A9 looks like a compelling alternative to the Nexus 5X or Moto X Pure Edition, for those that want a smaller device with a more premium look and feel. And the promise of quick updates is refreshing, but we’re not sure if they’ll be able to deliver that promise. Maybe the unlocked model but not carrier variants. We’ll have to get our hands on it before we comment on battery life, but from what we’re seeing that appears to be the only downside to a relatively good smartphone here as 2015 is winding down.

We’ll update with more details on carrier availability, pricing, color options and more as its announced by each carrier in the United States.