HTC One mini Coming To U.S. This Summer

Today HTC announced the new HTC One mini, a 4.3-inch version of the HTC One that puts many of the great features of the One into a smaller package.

The new HTC One mini is a 4.3-inch version of the company’s 4.7-inch flagship phone. The new smartphone maintains many of the same features of the HTC One and keeps the same basic design despite it’s smaller size.

The biggest change between the HTC One and HTC One mini is the screen. The HTC One mini has a 4.3-inch 720p display as opposed to the 4.7-inch 1080p display of the HTC One. The smaller screen makes the overall phone smaller, making the phone more comfortable for users with smaller hands, or just those who prefer smaller phones. 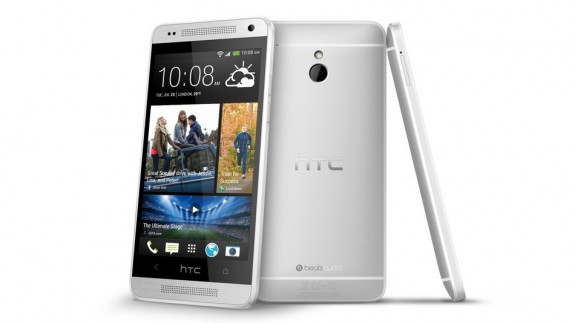 Despite it’s smaller size, the HTC One mini keeps the same basic design of the HTC One. The phone looks very similar from the front with the same BoomSound speakers and two capacitive buttons. The back uses the same anondized aluminum, but the mini isn’t all aluminum. The sides of the HTC One mini are plastic, though that likely won’t bother many users.

The HTC One mini uses the same 4MP UltraPixel camera as the HTC One that helps users take better low-light photos than other smartphones. The camera app has the same features as the HTC One, including the unique HTC Zoe feature shoots short video clips to go with each photo.

HTC BlinkFeed is also built into the HTC One mini, giving users easy access to news and social networks. Though users can always choose to use a standard Android homescreen as well.

The only feature of the HTC One the HTC One mini seems to lack is the IR sensor in the home button, which likely isn’t a deal breaker for many users.

The HTC One mini will start rolling out in “select markets” this August with a global release sometime in September. U.S. pricing and availability are unknown at the moment, but HTC will announce U.S. carriers partners for the new phone sometime later this summer.