After a bit of a delay, the HTC One will go up for pre-order today in the United States with AT&T set to start taking pre-orders for the all-metal flagship that will be touching down on both it and Sprint later on this month. 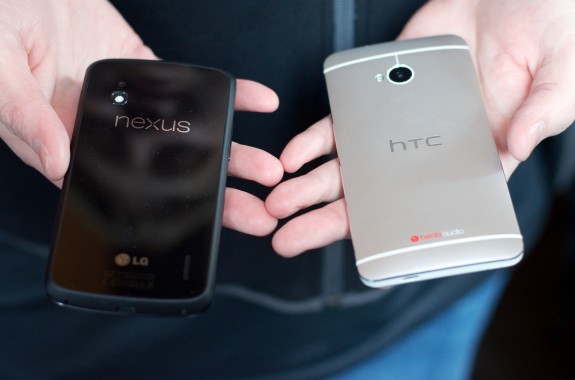 The HTC One will arrive later this month to battle other Android phones like the Nexus 4.

At 1PM CST, AT&T will become the first carrier to start taking pre-orders for the HTC One in the United States and it will be doing so ahead of its April 19th release date. However, unlike Sprint, AT&T will be taking pre-orders for not just one model, but two different variants of the HTC One. AT&T currently has an exclusive on the 64GB HTC One and it’s unclear if Sprint or the device’s other confirmed carrier, T-Mobile, will be carrying the 64GB model at any point in the future.

For now, the 64GB model belongs to AT&T and it will be available for a steep $300 on-contract. The smaller 32GB HTC One will be $200 on-contract, the standard for a flagship smartphone.

T-Mobile hasn’t revealed when it will be offering up the HTC One though we suspect that that information will be coming to the surface in the not-so-distant future.

The HTC One is HTC’s flagship smartphone and it comes with a host of high-end features including a 4.7-inch 1080p display, quad-core processor, Ultrapixel camera, Android 4.1 Jelly Bean and the new HTC Sense 5.